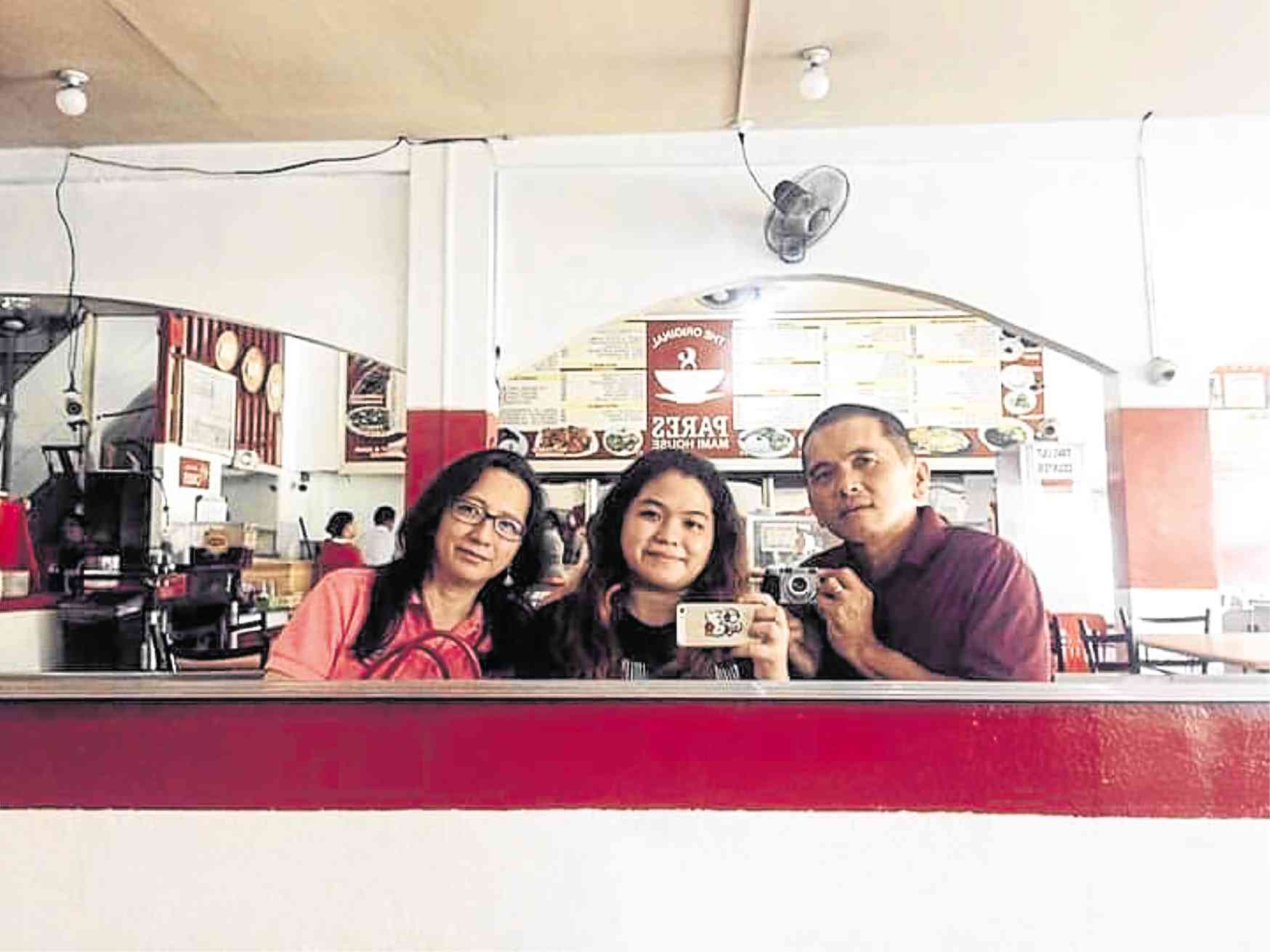 HAPPIER TIMES Kalayaan Rosales (center)with parents Rowena and Oliver,who police have accused of being
communist rebels behind the torching of a truck in Agusan del Norte in June 2017.

On Aug. 11, she claimed, plainclothes police officers forcibly took her parents, Oliver and Rowena, threw them in jail and accused them of crimes they did not commit.

The Rosales couple, who grew up during the dark years of martial law (a generation that came to be known as “martial law babies”), can thank their brave 25-year-old daughter and a group of human rights lawyers for helping lead the protest against their “unlawful” arrest.

The years of dictatorship under Ferdinand Marcos may be over, but freedom remains elusive for the Rosaleses.

As union organizers of the Confederation for Unity and Advancement of Government Employees (Courage), Oliver and Rowena have dedicated their lives to helping lowly paid government employees get a living wage and protect their labor rights, as well as their jobs from contractualization and privatization.

Kalayaan has always seen her parents’ advocacy as just a normal job. As a kid, her own face would land on protest materials of Gabriela and other cause-oriented groups. She would join her parents’ activities with their Courage colleagues and see for herself how natural it was for them to reach out.

But Kalayaan never knew then that their “ordinary, daily job” would eventually cost them their freedom.

In 2016, Rowena’s health was failing and Oliver had just survived a heart attack. The couple resigned from their jobs and decided to return to their hometown in Balagtas, Bulacan, to sell ukay-ukay (used) bags, toys, vinyl records, books and handcrafted fashion accessories at a rented stall in the public market.

The couple used their small income to pay off debts to relatives, friends and loan sharks who lent them money to start their small business. Whatever was left of their meager earnings were used to send their 15-year-old son Karlito to school. Kalayaan, meanwhile, worked as a government employee and helped with the family expenses.

The couple used their decrepit tricycle to move around and sell their goods. 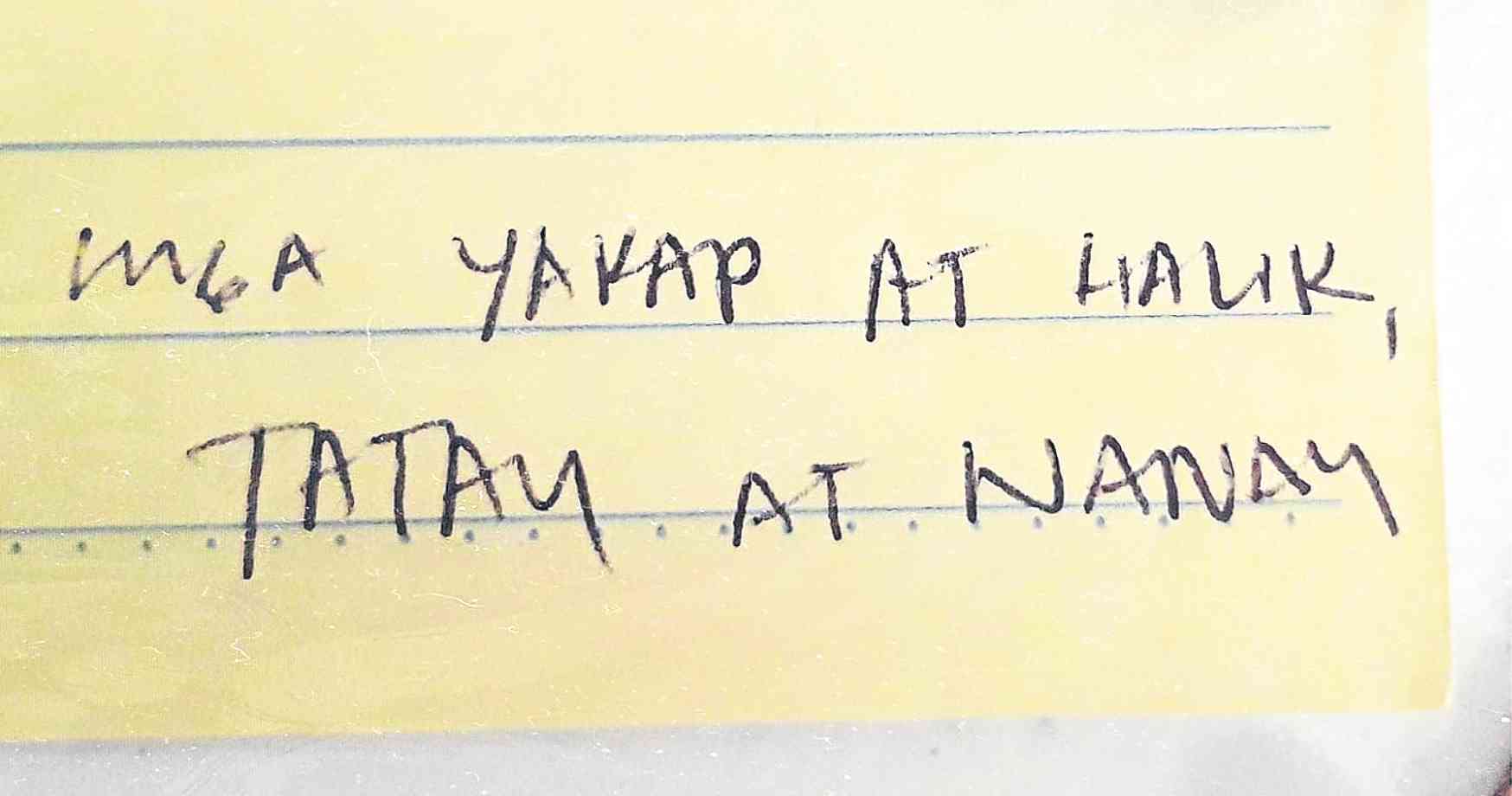 From detention at Camp Crame, the couple have sent a note of love to their brave 25-year-old daughter. —CONTRIBUTED PHOTOS

One Saturday, on their way home from the public market, Oliver and Rowena were dragged away from the tricycle by 10 men in civilian clothes, surgical masks and baseball caps.

Police arrested Rowena for her alleged role in an arson case in Cabadbaran, Agusan del Norte on June 24, 2017. A warrant for her arrest was issued by Judge Fernando Fudalan Jr. on Dec. 19, 2017.

The case against her stemmed from a fire that gutted a truck loaded with coconuts in Agusan del Norte, an incident blamed by the police on suspected members of the New People’s Army (NPA).

In their joint affidavit, Police Officer 2 Ramil Consencino and PO2 Jake Balberde said the Criminal Investigation and Detection Group (CIDG) had received information from a confidential informant on the whereabouts of Rowena.

Police listed her as the “secretary of intermediate mass organization 5” of the Communist Party of the Philippines’ “National Government Employees Bureau, National Organizational Department,” which was blamed for the fire.

When the arresting officers  found Rowena and Oliver, they handcuffed and blindfolded the couple and brought them separately to Camp Crame in Quezon City in black vans.

The policemen claimed they recovered guns, bullets and grenade from the couple whom the CIDG tagged as members of the NPA and its political organization, Communist Party of the Philippines.

But Kalayaan insisted her parents were not members of the NPA and only wielded pens, not guns, to fight for the oppressed. In fact, she said, they have never been to Agusan del Norte.

“Never once had I imagined my parents would end up in this predicament. But as a child, I’ve always felt that I had to share their time and love to others who are more in need. They devoted their lives to the oppressed and the disenfranchised. They taught me that the welfare of others is more important than our personal interests,” she said.

Rowena and Oliver believe that their case is a form of political persecution, she added.

“I can’t think of any other reason as well,” Kalayaan said.

The couple believe that they were arrested due to their previous involvement as office staff and union organizers of Courage, the national federation of unions and federations of workers in the public sector.

“We were harassed and stalked by suspected military agents and became victims of their oppression,” the couple wrote in their statement.

In July 2015, Courage sought state protection for its staff and officials, including the Rosales couple, by filing a writ of amparo in the Supreme Court. The tribunal granted the temporary protection order only to revoke it later.

Police arrested the couple a month after another Courage member, Juan Alexander Reyes, was nabbed in July 2018.

The National Union of Peoples’ Lawyers (NUPL), which has been providing legal assistance to the Rosaleses, denounced the arrests.

Lawyer Kristina Conti hit out at the couple’s “abduction” and accused the police of making up false accusations.

In a statement, Courage national president Ferdinand Gaite condemned the arrests as a form of “red-tagging against progressive leaders,” a pattern that, it said, has sent 509 political prisoners in the country to jail, including 118 ailing people and 47 women, who all face common criminal charges.

“The allegations of the [PNP] that the [Rosaleses] are officers of the National Government Employees Board, National Organization Department of the Communist Party of the Philippines, are outrageous lies concocted by the state,” Gaite said.

The slow wheels of justice, though, has prevailed in the case of the Rosales couple, who have not been arraigned since their arrest.

When Kalayaan went to Camp Crame on Friday to see her parents, they were still detained in separate crammed cells. Her parents, she said, while away the dark hours of detention by scribbling notes to their dearly missed children.

The Rosaleses are again relying on the power of words to bring to life the same courage they used to raise their children and help others fight for their rights to be heard.

In one of his poems, Oliver wrote: Ang rehas ay kwerdas/Tinitipa sa awit ng Pilipinas … Kumakain ng laman ang kulungan/Ng mga kinalimutan (The jail bars are strings/ that give music to the song of the Philippines … The cell consumes the flesh/ of the forgotten).

The cold and dark prison cells may have made her parents weaker, but they have never dampened their spirits, Kalayaan said.

Kalayaan still struggles to live up to her name. But she has learned to use it as a gift: To choose to safeguard their right to life and liberty in a society that tolerates impunity.