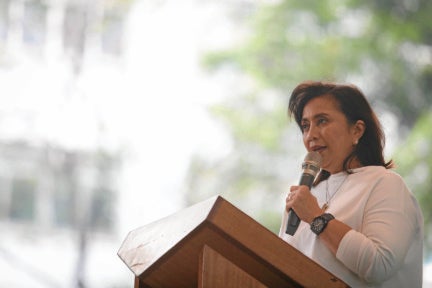 Vice President Leni Robredo, along with former President Benigno Aquino III and other opposition figures, joined members of various sectors in the Mass for Peace remembering Filipinos’ struggle against martial law under the regime of the late strongman Ferdinand Marcos, held at the Cory Aquino Democratic Space at the Henry Sy Sr. Hall of the De La Salle University-Manila on Friday, September 21, 2018. Photo by OVP

With these slogans, thousands of protesters from Laoag to Davao on Friday commemorated dictator Ferdinand Marcos’ martial law declaration 46 years ago in rallies and other gatherings, vowing to block a repeat of his strongman rule by President Duterte.

Following a Mass at De La Salle University in Manila attended by former President Benigno S. Aquino III and other critics of Mr. Duterte, Vice President Leni Robredo warned against the spread of the “false thinking” that democracy caused many of the country’s problems.

“But we already experienced what it was like to live under an ironfisted rule: much blood was shed; institutions eroded,” said Robredo, chair of the opposition Liberal Party.

The challenge now, she said, is to learn from the lessons of the revolution that ended the Marcos dictatorship: to unite against those that threaten our freedoms.

“It is time to take a stand,” she said. “Democracy is in its death throes again.”

At the Iglesia Filipina Independiente Church In Laoag City, some 200 farmers, fishermen and human rights advocates recalled in a forum the horrors of martial law imposed by Ilocos Norte’s favorite son.

“We were forced to evacuate our land, the military burned our house, my cousin was killed and some of my barrio mates went missing during the time of martial law,” said Antonino Pugyao, president of the Solidarity of Peasants Against Exploitation (Stop-Exploitation) in Ilocos Norte.

The church was surrounded by policemen, backed by a fire truck, to prevent a rally from breaking out.

In Davao City, the President’s bailiwick, various groups marked the martial law declaration by calling for an end to human rights abuses and by standing up to what they described as the “looming dictatorship” of Mr. Duterte.

Mags Z. Maglana, speaking for the martial law survivors’ group Konsyensya Dabaw, said the imposition of martial law in Mindanao was not an effective “cure” to bombings and other threats in the south.

“Mindanao and the rest of the Philippines have serious problems that require hands-on daily good governance by civilian authority,” Maglana said, citing the people’s unease over high prices, an incomplete Bangsamoro peace process, and restiveness and frustration over the slow recovery and rehabilitation of Marawi and other Lanao del Sur areas, among others.

The biggest rally of more than 10,000 was held at Rizal Park in Manila in a show of force by groups from a broad political spectrum that also spanned multiple sectors and generations.

The protest served not only as a commemoration of what was seen as one of the darkest chapters in Philippine history, but also a referendum on the Duterte administration with demonstrators carrying placards with scathing rebukes of his flagship policies, from the brutal war on drugs to the proposed shift to federalism.

Organizers estimated that up to 15,000 students, farmers, workers, fisherfolk and indigenous peoples made their way in the rain to the park from various assembly points around Metro Manila.

“This gathering would have been unimaginable just two or three years ago,” Yael Toribio, University of the Philippines Diliman student council chair, told the Inquirer.

“Very different blocks are present now,” Toribio said. “They come from across the opposition, with very different lines of thinking, but they had no second thoughts about uniting here.”

The protesters, most of them in black attire to show they would “never forget,” chanted “Never Again, Never Again to Martial Law!”

Ousted Supreme Court Chief Justice Maria Lourdes Sereno, one of the rally speakers, said a video showing a conversation between the dictator’s son and martial law administrator Juan Ponce Enrile was aimed at “historical revisionism,” a reference to efforts by the family and supporters of Marcos to glorify his regime while maligning his successors.

Sereno also said the Marcoses must return all their ill-gotten wealth.

A “Never Again to Martial Law” rally also was held in Legazpi City by more than 1,000 farmers, workers, youth and women, who marched two kilometers from the Bicol Regional Training and Teaching Hospital (BRTTH) to Peñaranda Park.

In Laguna, the protests started with an early morning Mass at the St. Paul the First Hermit Cathedral in San Pablo City.

At the University of the Philippines Los Baños (UPLB), a forum dubbed “Magkaisa, Labanan ang Diktadura” was attended by about 300 students.

In the Visayas, about 3,500 rallied in Iloilo City, 1,500 in Roxas City in Capiz, 1,000 in Kalibo in Aklan, 300 in Tacloban City, about 100 in Bacolod City and 2,000 in Escalante City in Negros Occidental, where 21 people were gunned down by security forces on the eve of the martial law anniversary in 1985 in what has come to be known as the Escalante Massacre.

In Tacloban City, about 300 members of various cause-oriented groups joined the nationwide commemoration.

The freedom memorial would comprise a museum, a library, office spaces and an activity center to serve as a perpetual site to honor the grim era’s record of human rights abuses, according to NHCP Chair Rene Escalante.

UP president Danilo Concepcion, who recently declared Sept. 21 as UP Day of Remembrance of the atrocities during martial law, called the historic agreement as the university’s “sacred vow” to prevent the return of dictatorship.