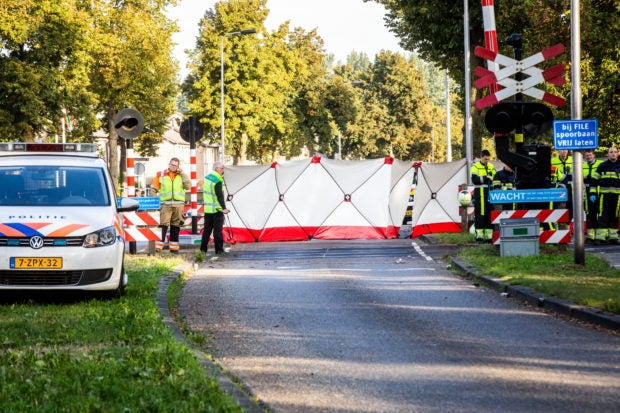 Rescuers operate at the scene of a train crash with a cargo bike at a rail crossing in Oss, The Netherlands, on September 20, 2018 killing four children and severely injuring another child and an adult. AFP

THE HAGUE – Four children from a Dutch daycare center were killed when a train hit their electric cargo bike at a level crossing, police said Thursday.

A fifth child and a woman were also critically injured during Thursday’s accident in Oss, a town near the German border around 110 kilometers (65 miles) southeast of the capital Amsterdam.

Dutch Prime Minister Mark Rutte tweeted his condolences from an EU summit in Salzburg, Austria, over a tragedy that has shaken the cycling-mad country.

“Deeply affected by the incredibly sad news from Oss where four young children have died in a horrible accident. I wish everyone involved much strength with this heavy loss,” Rutte said.

Cargo bikes – bikes with a large box on the front used for carrying children or shopping – are a common sight in the Netherlands, where cycling is a way of life.

Police confirmed the train collided with the three-wheeler bike on a crossing as it was taking children from the daycare center to drop them off at local schools.

“Four children were killed in the accident. Emergency services are still at the scene,” police in Brabant province said on Twitter.

“The accident involved an electric cargo bike from a nursery that was headed for a school in Oss,” they added. “The families concerned have been informed by us of the awful news.”

The ANP news agency reported that the children were between four and 11 years old, although there was no immediate official confirmation of their ages.

ANP, quoting people who know the woman who drove the bike, said she had just dropped some children at one school and was heading to another.

It was the sixth such accident at the crossing since 1975, it added.

Queen Maxima of the Netherlands said that she and King Willem-Alexander “have no words”.

“Our thoughts go out to all families who have lost their children because of a terrible accident in Oss,” the queen said during a separate royal visit.

Police said they were speaking to several witnesses, including children, to see “how this accident could happen.”

The train was headed from the eastern town of Nijmegen to nearby Den Bosch, said the national railways service NS.

“It is really a terrible accident,” said an NS spokesman.

The Netherlands has more than 22 million bikes in a country of 17 million, and its flat landscape is home to one of the world’s most extensive cycling networks.

In 2017, 206 cyclists were killed on Dutch roads, according to the Dutch Institute for Road Safety Research. /kga