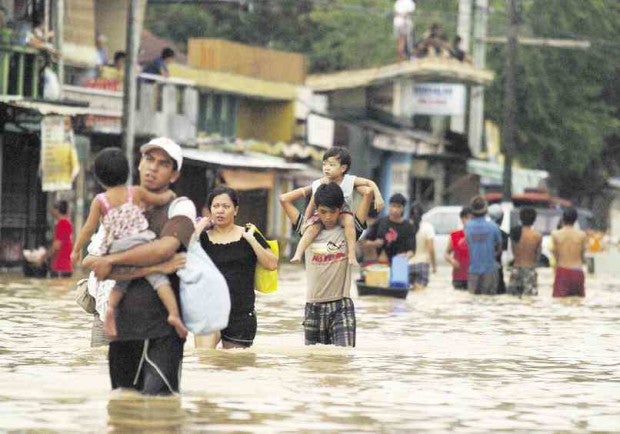 RESIDENTS of Calumpit town in Bulacan province wade through a flooded street after rains dumped by Typhoon “Pedring” in 2011 submerged a wide section of Central Luzon region. FILE PHOTO

CITY OF MALOLOS – The Bulacan government on Thursday asked its neighboring province, Pampanga, to excavate and deepen the Candaba Swamp to prevent floods from cascading towards the Bulacan towns of Calumpit and Hagonoy.

The process would allow the swamp to contain more runoff rainwater and river water from Pampanga and Nueva Ecija, which flows straight to the two Bulacan towns, said Bulacan Gov. Wilhelmino Sy-Alvarado in a news conference.

Calumpit and Hagonoy are enduring floods as high as six feet after Typhoon “Ompong” lashed through northern Luzon on Sept. 15.

Aside from making Candaba Swamp part of the region’s flood control system, the government could also build water containment facilities in Pampanga and Nueva Ecija so rainwater could be used for other purposes, Alvarado said.

Bulacan’s dams, such as the Angat reservoir, are the sources of Metro Manila’s daily potable water supply./lb