The Commission on Higher Education (CHED) should find ways to ensure that student-beneficiaries affected by the Tulong Dunong program’s budget cut would still be provided assistance with the Tertiary Education Subsidy (TES), Senator Sonny Angara said on Thursday.

“To clarify the issue, while the Tulong Dunong program will be cut by P3 billion, the Tertiary Education Subsidy will be raised by P11 billion,” Angara, vice chair of the Senate finance committee tasked to defend CHED’s budget, said.

“We are urging the CHED to come up with a guideline to ensure that current beneficiaries of Tulong Dunong can still benefit from the increased funding for the Tertiary Education Subsidy,” he asked.

“Para naman walang iskolar ang mawawalan ng benepisyo [So that no scholar will be deprived of their benefits],” Angara added.

According to CHED Commissioner Prospero de Vera, around 350,000 students will be affected by the move. 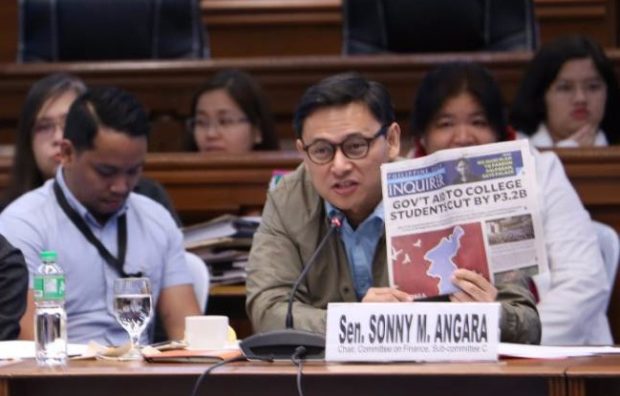 Under the Tulong Dunong program, students recommended by local government officials regardless whether they are enrolled in a public or private university, will get P12,000 worth of financial assistance per year.

Angara hopes that the TES, which was created due to R.A. 10931 or the Universal Access to Quality Tertiary Education Act, would offset the predicted number of affected students as it can now accommodate 500,000 students.

“For next year, the Free College Law will get a bigger funding of P51 billion. P27 billion of which will go to the Tertiary Education Subsidy. The number of beneficiaries will also go up to 500,000 poor students,” he explained.

Under the TES, poor college students will be given allowance for books, supplies, transportation, room and board, and other education-related personal expenses.

Angara  pointed out that under  R.A. 10931, TES beneficiaries are prioritized in the following order: