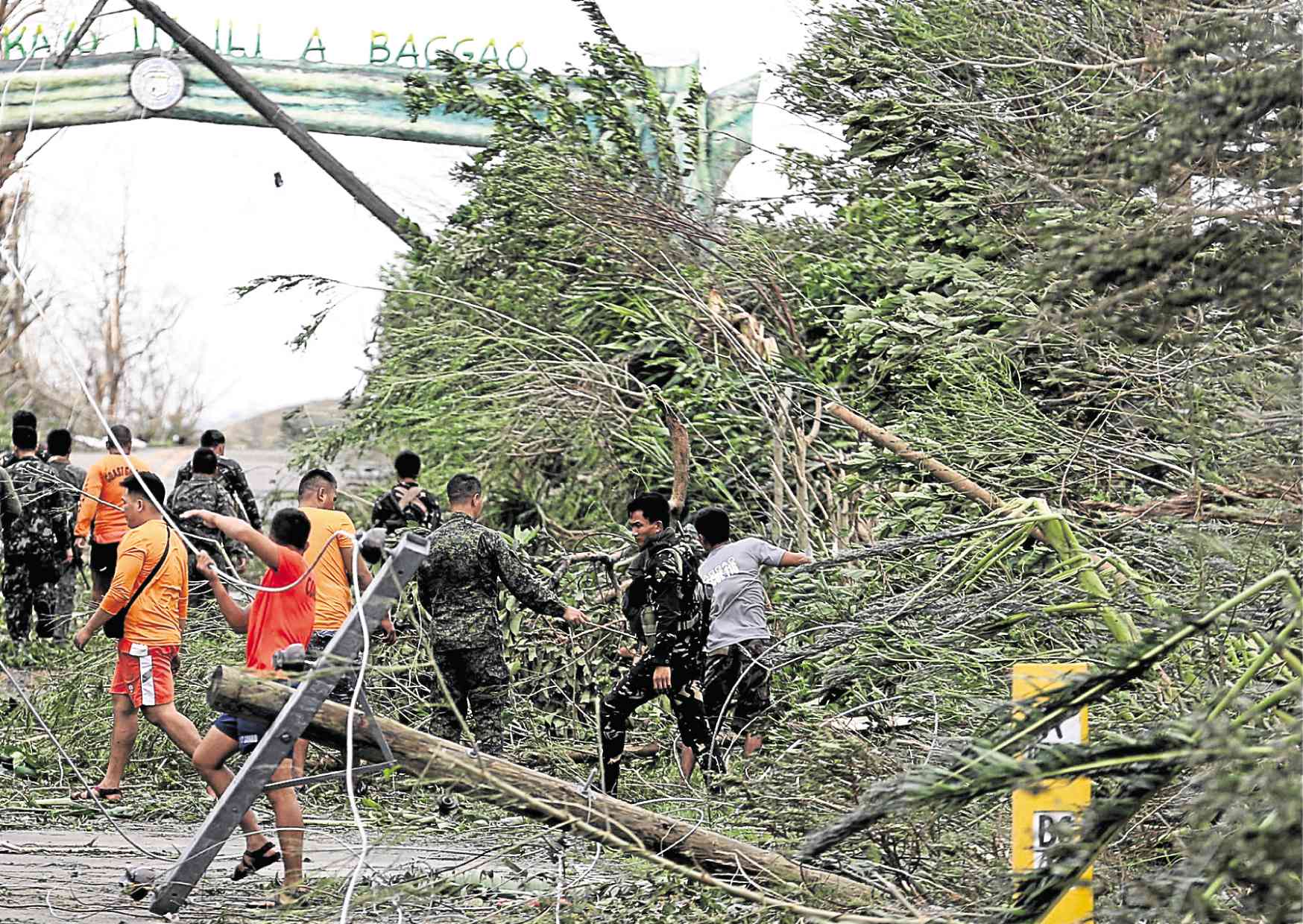 CLEARING OPERATION A government team removes toppled trees and other debris from a road leading to Baggao town in Cagayan after Typhoon “Ompong” battered the province. RICHARD A. REYES

La Union became the fifth province placed under a state of calamity this week after Typhoon “Ompong” pounded northern Luzon on Saturday.

Earlier, local governments in the provinces of Isabela, Cagayan, Ilocos Norte, Kalinga and Quirino issued a similar declaration after Ompong destroyed farms, public infrastructures and homes in these areas.

The cities of Ilagan in Isabela province, Tuguegarao in Cagayan and Vigan in Ilocos Sur province, and the town of Mayoyao in Ifugao province, were also placed under a state of calamity.

The declaration of a state of calamity allows a local government to access funds for rehabilitation and emergency assistance after a disaster strikes.

The La Union provincial disaster risk reduction and management office (PDRRMO) said the typhoon destroyed crops worth P934 million, and left P982 million worth of damage to infrastructure. It said 29,824 families were affected by the typhoon.

In Isabela, the storm damaged P3.6 billion worth of crops, roads and government buildings. Damage to agriculture was placed at more than P3.5 billion, with palay and corn farms posting the highest losses.

Despite the strength of Ompong, the coastal towns of Palanan, Maconacon, Divilacan and Dinapigue in Isabela suffered minimal damage, compared to the impact of Typhoons “Juan” in 2010 and “Lawin” in 2016.

President Rodrigo Duterte, in his visit to Isabela on Tuesday, said he was happy no one died in the province, one of the northern Luzon communities on the path of Ompong.

“I am almost exhilarated from this piece of good news. Zero casualty is welcome news… Buhay talaga ang mahalaga (Life is really important),” the President said when he was briefed at the provincial capitol in the city of Ilagan.

The President reiterated his plan to build gymnasium-like centers to serve as shelters in typhoon-prone provinces and cities, to spare schools that were often used as evacuation centers.

In Quirino, Ompong destroyed P154 million worth of palay, corn and vegetables, and damaged farm-to-market roads and bridges worth P98 million.

Kalinga, a major rice producer, lost about P350 million worth of palay. Damage to crops in the Cordillera region reached P2.6 billion.

The typhoon did not spare farms in Central Luzon, with Tarlac province losing P500 million worth of crops and infrastructure.

Alicia Cruz, Tarlac agriculturist, said P206.8 million worth of palay (unhusked rice) in the province’s 13 towns and Tarlac City were destroyed by the typhoon.

Worst-hit were the rice-producing towns of Camiling, Concepcion, Gerona, Mayantoc and La Paz, she said.

Marvin Guiang, Tarlac PDRRMO chief, the province would need at least P238 million to repair roads and bridges in the province.

In Bulacan province, floodwaters as high as 1.5 meters (5 feet) submerged the towns of Calumpit and Hagonoy, sending more than 2,500 residents in nine villages back to evacuation centers or other areas despite the good weather.

In Pangasinan province, 106 villages in 11 towns and cities remained submerged in floodwaters, forcing 1,905 families to stay in different evacuation centers, according to the PDRRMO.