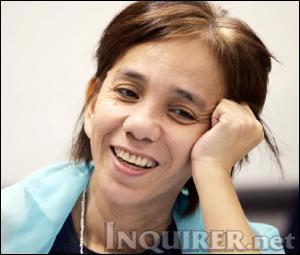 Heidi Mendoza, a former state auditor, rose to national prominence in 2011 after appearing in legislative hearings on the irregular transactions involving generals in the Armed Forces of the Philippines.

She is now an undersecretary general of the UN Office of Internal Oversight Services, a post she has held since December 2015.

In 2011, six years after leaving the Commission on Audit (COA), Mendoza resurfaced and testified before congressional hearings on how military funds were diverted to its retiring officials as “pabaon” (parting gift).

Garcia, who was accused of pocketing more than P300 million in military funds, had entered into a plea bargain with state prosecutors.

The plea bargain extinguished his plunder and money laundering case, and required him to plead guilty to lighter offenses of direct bribery and facilitating money laundering, in exchange for turning over to the state P135 million of his family’s assets.

Mendoza had to quit her job at the Asian Development Bank so she could testify about corruption in the military.

But she returned to the COA in 2011 when she was appointed by then President Benigno Aquino III as commissioner.

In February 2015, following the retirement of then COA Chair Grace Pulido-Tan, Mendoza was named as acting head of the agency.

Mendoza led the special COA team that conducted an audit of the transactions entered into by Garcia in 2004.

Even after resigning from the COA in 2005 over her frustrations with the agency, she testified in Garcia’s plunder trial beginning in 2007. —Inquirer Research