US gov’t approve importation of pot drug for tremor study 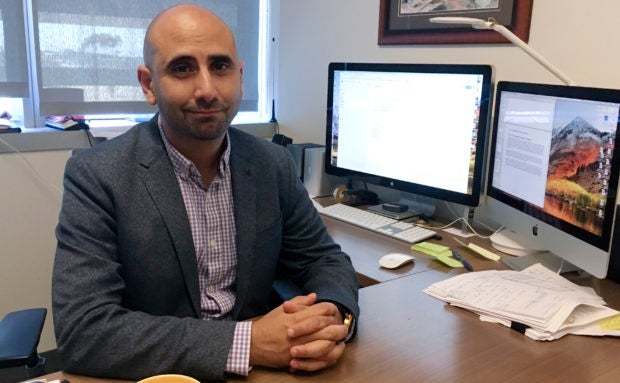 Dr. Fatta Nahab, a neurologist who directs the Functional Imaging of Neurodegenerative Disorders Lab at the University of California San Diego Health’s Movement Disorder Center, sits at his desk on Sept 17, 2018, in San Diego.  AP

SAN DIEGO — In a rare move, the US government has approved the importation of marijuana extracts from Canada for a clinical trial, highlighting a new avenue for American researchers who have long had trouble obtaining the drug for medical studies.

The University of California San Diego’s Center for Medicinal Cannabis Research announced Tuesday the Drug Enforcement Administration has OK’d its plans to import capsules containing two key cannabis compounds — CBD and THC — from British Columbia-based Tilray Inc . to study their effectiveness in treating tremors that afflict millions of people, especially those over 65.

Marijuana remains illegal under federal law, and researchers aren’t allowed to simply obtain it through providers licensed under state law. The US has a program for supplying it for research through the National Institute on Drug Abuse, with cannabis grown by the University of Mississippi, but scientists have long complained about the difficulty of obtaining it, as well as the quality and limited variety of the pot available.

The University of California San Diego researchers spent years planning and seeking approval for their study from the DEA and the Food and Drug Administration. Paul Armentano, deputy director of the marijuana law reform organization NORML, said that illustrated how badly American researchers need alternative sources for cannabis.

“It’s very telling that you have researchers in the U.S. willing to exert the patience and go through the regulatory hurdles to make this happen at the same time the United States has its own domestic supply source,” Armentano said.

Medical marijuana is federally legal in Canada, and the country will allow recreational sale and use beginning next month.

Marijuana compounds have been imported for clinical trials before, including by Britain-based GW Pharmaceuticals, which won approval this year to sell its purified CBD capsule, Epidiolex, to treat severe forms of epilepsy — the first cannabis drug approved by the US Food and Drug Administration. While GW Pharmaceuticals developed that drug in-house before bringing it to the US for testing, Tilray, which recently became the first marijuana company to complete an initial public stock offering in the US, said it can work with researchers to develop the cannabis formulations they hope to study.

“It’s a really big milestone for Tilray and also just for the whole industry,” said Catherine Jacobson, Tilray’s director of clinical research. “Researchers in the U.S. have really been limited to doing research using dried flower. We have been able to prove to the FDA that we can manufacture investigational study drugs containing cannabinoids that meet their standards.”

Neither the FDA nor the DEA had immediate details on how often the agencies have approved the import or use of foreign-made cannabis drugs in research, but DEA spokeswoman Katherine Pfaff says: “It is done. There are definitely situations where, when there’s no source in the U.S., a registrant can import a cannabis-derived drug from another country.”

The National Institute on Drug Abuse usually provides marijuana as bulk flower or joints to be vaporized or smoked.
NIDA, which does intend to expand how much marijuana the University of Mississippi grows for research, does not yet provide marijuana compounds in capsules, said Don Stanford, assistant director of the Research Institute of Pharmaceutical Sciences at the university.

Researchers say it’s tough to measure the dose someone receives when they inhale pot. Dr. Fatta Nahab, a neurologist at the University of California San Diego Health’s Movement Disorder Center, is the principal investigator on the tremor study. He said he worried that the seniors he expected to recruit as participants wouldn’t want to inhale marijuana, and the researchers have spent the past two years on paperwork and regulatory hurdles to obtain the capsules.

There is no specific drug to treat essential tremor, a shaking condition. Unlike Parkinson’s disease, which causes shaking when someone is not moving, people with essential tremors shake when they are, making everyday activities like writing, drinking and speaking difficult. The condition afflicts 10 million people nationally and millions more across the globe, according to the International Essential Tremor Foundation.

Many patients try to control the shaking by repurposing other drugs, such as blood pressure medicine, with limited success.

“There is a huge need to come up with something,” Nahab said.

Nahab said he started looking into whether marijuana could be used to treat essential tremor after two patients showed sudden improvement after smoking pot or consuming CBD purchased online.

The FDA application outlined the drug formula — a 20:1 ratio of CBD to THC, to minimize any high study participants might feel — as well as its purity, toxicity, shelf life and other details. They also had to get safety approvals from the university and present their plans to a California research advisory panel.

The university is still recruiting patients and hopes to have 16 to 20 enrolled. Researchers monitor the tremors with a device placed on the wrist and will record changes in the severity of the shaking, among other things.

Tilray is providing the drug and limited financial support but said it will have no role in reviewing the study’s results.

“Essential tremor is ten times more common than Parkinson’s and yet nobody really knows about essential tremor,” Nahab said. “That we’re finally getting to a potential therapeutic option in an area that is untapped is a big deal.” /ee