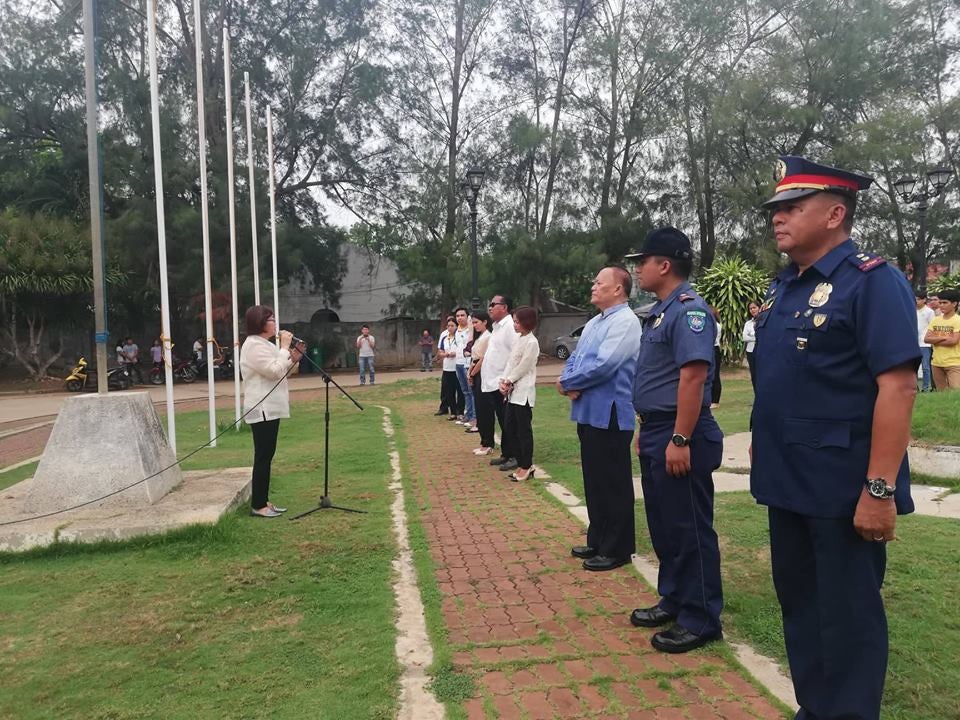 Pedro Fuertes (third from right) and Leonila Montero (left), who both claim to be the legitimate mayor of Panglao, Bohol, attend the town’s flag-raising ceremony on Monday, Sept. 17, 2018. INQUIRER VISAYAS / LEO UDTOHAN

PANGLAO, Bohol — Employees of the town government gathered at the town hall on Monday for the weekly flag-raising ceremony but they were confronted by the sight of two officials claiming to be the rightful mayor of Panglao.

Both Pedro Fuertes, the acting mayor, and Leonila Montero, who is returning to the mayoral post after her suspension, addressed the employees.

“The fact is I am the duly elected mayor of Panglao,” Montero said. “I have already served [the penalty for] my legal predicaments.”

According to Fuertes, the town’s vice mayor, he will wait for an order from the Department of the Interior and Local Government (DILG) before he relinquishes his post as acting mayor.

“I am just waiting for the DILG for whatever decision [it will issue],” he said.

The DILG installed Fuertes, the town’s vice mayor, as acting mayor after the Office of the Ombudsman suspended Montero for three months on Oct. 24, 2017, for simple misconduct for appointing four losing candidates less than a year after the elections. Her move violated the one-year ban on the appointment of a losing candidate.

The Ombudsman, however, upgraded the charges to grave misconduct and ordered Montero’s dismissal from government service on Jan. 19. Montero went to the Court of Appeals (CA), which issued an order on June 28 affirming her three-month suspension and setting aside her dismissal.

On Sept. 10, Montero resumed her duties as mayor. The town council also approved a resolution acknowledging her return to office and reinstating her authority as a signatory in financial transactions of the local government.