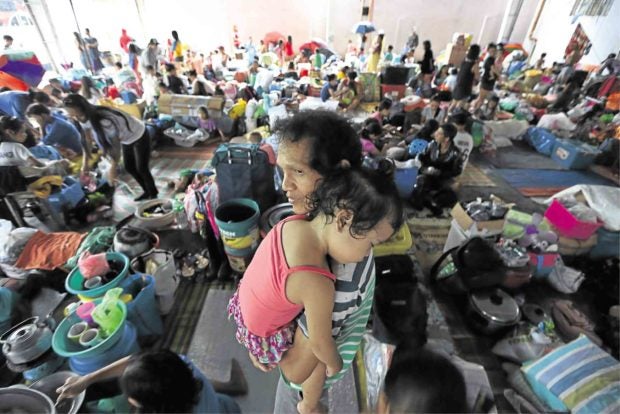 In Rizal province, away from the eye of Typhoon ‘Ompong,’ displaced families in San Mateo town pack an evacuation center in Barangay Banaba.  INQUIRER PHOTO

A total of 591,762 people or 147,540 families were affected when Typhoon “Ompong” unleashed its fury on the country, the National Disaster Risk Reduction Management Council (NDRRMC) said Monday.

A total of P28,976,636 in assistance was given by national and local governments and non-government organizations to Regions I, II, III, Mimaropa (Mindoro, Marinduque, Romblon and Palawan), CAR (Cordillera Administrative Region), and NCR (National Capital Region).

NDRRMC said a landslide occurred in Poblacion, Salegseg, and Balbalan, Kalinga, affecting the Western Kalinga Hospital. There were no casualties, but eight patients were transferred to the Rural Health Unit in Balbalan.

Another landslide was reported in Natonin, Mountain Province, which damaged 13 houses but there were no reported casualties.

In Labo, Camarines Norte, 13 passengers sustained minor injuries when an L300 van bound for the town of Basud met an accident. The passengers were assisted by barangay officials and the Municipal Disaster Risk Reduction and Management Office.

A “sinking area” was reported at Gibraltar, Baguio City, where personnel of the Department of Public Works and Highways and Bureau of Fire Protection responded. There were no reported casualties, the NDRRMC said.

A total of 451 houses were damaged in Regions I, III, and CAR, the report added.

NDRRMC also reported that 229 areas were flooded in Regions I and III and in Calabarzon (Cavite-Laguna-Batangas-Rizal-Quezon). It added that of that number, flooding in 35 areas have subsided.

Work in government offices were also suspended in 228 cities and municipalities in Regions I, II, III, VI, XIII, and CAR.

As of 12 a.m. Monday, 83 passengers and three vessels were stranded in ports in Western Visayas and Bicol, the NDRRMC said. /cbb