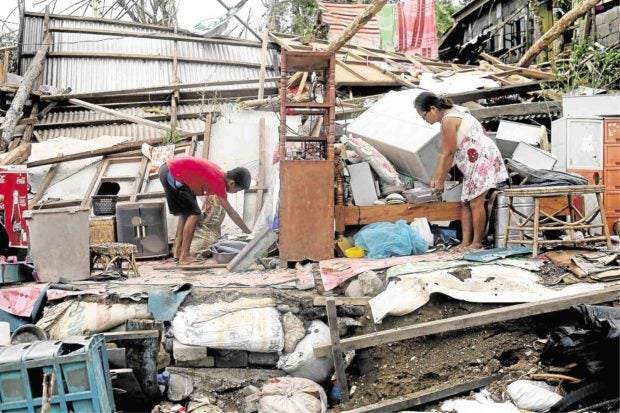 STORM’S FURY Lydia Domingo and her nephew, Marwin Palacio, pick up the pieces after the powerful typhoon destroyed their house at Barangay San Lorenzo, Lallo town, Cagayan province, when it barreled through northern Luzon. —RICHARD REYES

BAGUIO CITY — Massive landslides killed 64 people while 45 others were missing in this city and in the provinces of Benguet, Mountain Province, Kalinga and Nueva Vizcaya, as Typhoon “Ompong” (international name: Mangkhut) unleased its fury on Friday night and early Saturday, the Philippine National Police said on Sunday.

The PNP said 33 people were injured in the massive storm.

The hardest hit province was Benguet, where most of those who died perished in landslides, the PNP said.

Power and communication lines were toppled, but some were restored late Sunday in parts of the mountain city and in provinces that were in the path of Ompong  as it exited the country on Saturday night.

As of 3 p.m. on Sunday, the typhoon was spotted 935 kilometers west-northwest of northern Luzon, well outside the Philippine area of responsibility. It was headed for southern China and Hong Kong, packing winds of 130 km per hour and gusts of up to 180 kph at a fast northwestward pace of 30 kph.

The weather cleared up on Sunday in Batanes province, allowing residents to unstrap the ropes holding down their houses.

But rescue and retrieval teams continued to search for nine people buried in mud in Baguio, where 39 landslides were recorded.

Five bodies had been recovered, while a sixth person was struck and killed by a falling tree.

In the mining town of Itogon, strong rains eroded a hillside, pushing down a bunkhouse and the houses of pocket miners and their families at Barangay Ucab before 2 p.m. on Saturday. 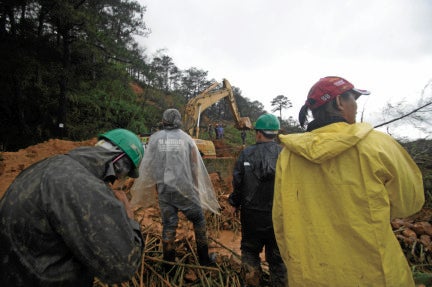 Rescuers on Sunday recovered the bodies of 30 people and were looking for 31 more based on an initial estimate.

In Bontoc, the capital town of Mountain Province, a family of eight was buried in mudslide at Sitio Dantay, Barangay Alab Oriente, on Saturday afternoon.

Also on Saturday, a man died shortly after he was rescued from a landslide near a river in Pasil town, Kalinga province.

James Cayo Bitao was rescued by volunteers and policemen at Barangay Guina-ang and was to be taken to the Pasil rural health center. He died while he was being transported on foot to Lubuagan town where he was to be driven to  Kalinga Provincial Hospital in Tabuk City.

In Nueva Vizcaya province, a landslide on Saturday killed a family of four at Barangay Banaw in Kayapa town.

The fatalities were a 36-year-old father and his three children—a 19-year-old son; a 2-year-old girl; and an 8-month-old child.

Halsema Highway, a major road network used to transport vegetables, was closed on Sunday due to a 50-meter erosion in Buguias town, Benguet province.

Bontoc-Banaue Road, which leads to Ifugao province, was also closed due to a 150-meter erosion near Mount Polis.

Also closed due to falling rocks was Kennon Road. Landslides also affected Marcos Highway, but it remained open to all vehicles on Sunday.

In Ilocos Norte province, 10,596 residents in two cities and 19 towns who were evacuated at the height of Ompong, returned home on Sunday. 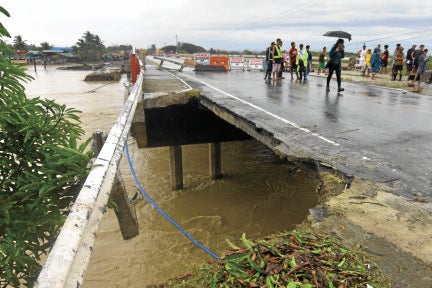 The Department of Education said many schools were damaged by Ompong’s winds. Initial damage was placed at P12.6 million.

People availed themselves of free calls and charging stations offered at outlets of two telecommunication companies and a private mobile telephone retailer in Ilocos Norte.

The Am-among Festival in Bontoc, which coincided with its 110th founding anniversary, was supposed to open on Monday but was also canceled.

But the Philippine Youth Games (Batang Pinoy) would push through as scheduled on Monday in Baguio.

In Bulacan province, flash floods caused by cascading waters from the Sierra Madre and rains brought by Ompong submerged most of the 24 towns and rendered eight major roads impassable.

The two dams below Angat had been releasing water before Ompong blew through northern Luzon.

But Ipo Dam reduced its discharge when its reservoir level dropped to 101.08 masl.

The towns of San Miguel, Marilao, Guiguinto and Calumpit suffered floods that were between 30 centimeters and 1.8 meters.

A total of 3,980 people in 32 villages of the towns of Bulakan, Plaridel, Santa Maria, Obando, Balagtas, Norzagaray, Paombong, and Guiguinto and Malolos City were moved to 32 evacuation centers. —Kimberlie Quitasol, Karlston Lapniten, Villamor Visaya Jr., Leilanie Adriano and Carmela Reyes-Estrope; with reports from Julie M. Aurelio And Jeannette I. Andrade In Manila and AP