Official apologizes for name of project to round up strays, says he only wanted it to be noticed
By: Jhesset O. Enano - Reporter / @JhessetEnanoINQ
Philippine Daily Inquirer / 05:55 AM September 17, 2018 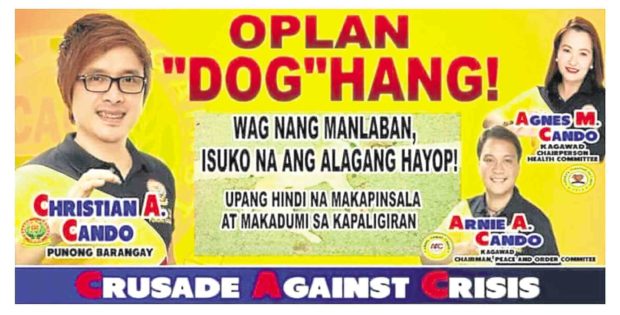 CATCHY BUT… The poster that started it all.

After earning the ire of animal rights’ advocates and netizens, officials of a barangay in Novaliches, Quezon City, have been forced to rethink the name of an initiative that urged residents to surrender unwanted dogs to a pound.

The name was obviously a play on “Oplan Tokhang,” the government’s antidrug campaign that has become synonymous with the bloody crackdown that has left thousands dead.

There was even an admonition on the poster: “Wag nang manlaban, isuko na ang alagang hayop (Don’t resist, surrender your pets)!”

Animal groups quickly condemned the name of the barangay project, saying it encouraged violence against pets.

“The use of the term ‘dog’-hang whether as an allusion to ‘tokhang’ (used colloquially to mean ‘to summarily kill someone’) or as a way to encourage violent acts toward animals (i.e. ’hang’) as a means of animal control is wrong,” the Philippine Animal Welfare Society (PAWS) said in a statement.

Animal control or the collection of strays “must be done humanely” under the Animal Welfare Act, it stressed.

“Using Tokhang to refer to the killing or rounding up of animals who have not committed any crime is unfair and ignorant,” the group added. “Its message is also dangerous and irresponsible as the poster gives the impression that inhumane acts toward strays are acceptable.”

“By telling the public to surrender their animals to the pound, Barangay Capri officials encourage pet abandonment, instead of educating them to become responsible pet owners,” PAWS said.

Another group weighs in

The University of the Philippines Alliance of Advocates for the General Welfare of Animals echoed PAWS’ position and called on the barangay officials to stop the implementation of the program.

It urged them instead to conduct initiatives  such as mass spaying/neutering and animal vaccination.

After the disputed poster was taken down online, Cando apologized and took responsibility for the name of the project, adding that he only wanted it to be “noticed” by irresponsible pet owners.

The name has since been changed to the longer “Oplan Kontra Iresponsableng Pag-aalaga ng Hayop (Oplan Anti-Irresponsible Care for Animals)  while the “manlaban” admonition has also been removed.

In a Facebook post, Cando stressed that the project’s only objective was to promote responsible pet ownership.

“The word Tokhang only had a negative perception because of rogue policemen in antidrug operations, but it actually has a good goal, which is to … ‘knock [on the houses of and] plead’ with drug users,” he said.

“I only likened Doghang to this cause: to knock [on the houses of] and plead [with] those who have pets but do not have the capacity to care for them,” he said, adding that several dogs had been surrendered to them as a result.

“We stress that not a single dog has died or will die under this initiative because we condemn any act of violence against animals,” Cando said.

The Animal Kingdom Foundation (AKF) has called on Cando and other barangay officials to penalize irresponsible owners, instead of seeing stray dogs as “pests” in the community.

“The AKF will continue to monitor and we will not hesitate to condemn these kinds of messages, especially if they come from government officials and persons of authority,” it said.