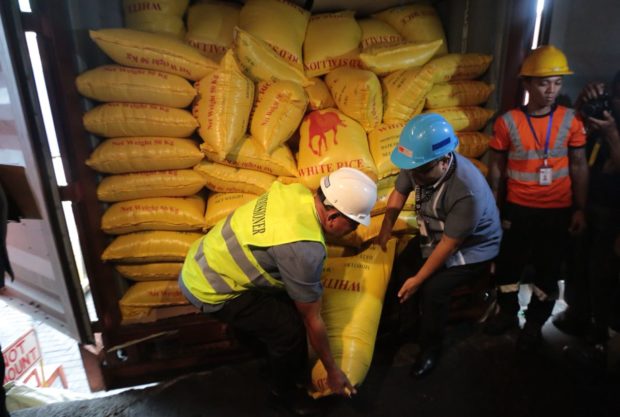 Customs Commissioner Isidro Lapeña inspects one of 200 containers containing Thailand white rice estimated to be worth P250 million which his bureau confiscated in June 2018 at The Manila International Container Port in Tondo, Manila because the shipment had no importation permit from the National Food Authority. (Photo by GRIG C. MONTEGRANDE / Philippine Daily Inquirer)

The Bureau of Customs has released 7,000 bags of smuggled rice, following the directive of Finance Secretary Carlos G. Dominguez III’ to donate the contraband to those affected by Typhoon “Ompong” (internationally known as “Mangkhut”).

The BOC seizes smuggled items, that it, items that enter the country without the correct import duties and other taxes being paid.

Dominguez also approved the donation on Friday as well.

The BOC is an agency attached to the Department of Finance.

Dominguez had earlier instructed Lapeña to release all confiscated rice, as well as other food items in the BOC’s possession, and donate them to the Department of Social Welfare and Development (DSWD).

These goods were intended as relief to victims of “Ompong.”

Under the Customs Modernization and Tariff Act, rice and other seized goods – such as food, clothing and medicines – can be be donated to the DSWD. /atm