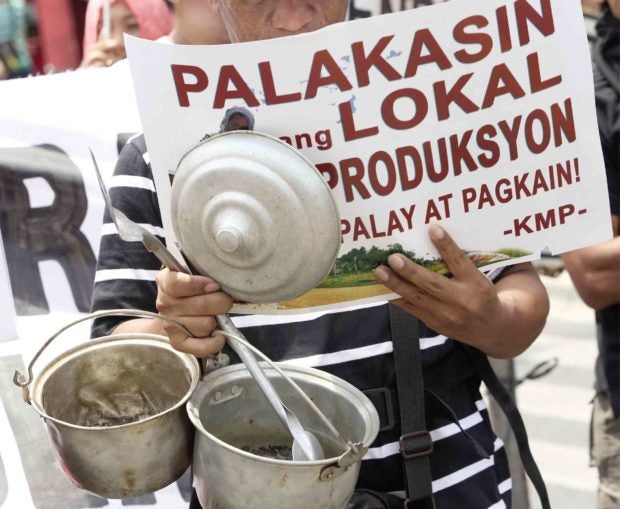 PRICE PROTEST Farmers hold a rally near Malacañang Palace on Sept. 9 using empty pots and pans to demonstrate what they said was the poor’s inability to cope with rising prices of goods.—MARIANNE BERMUDEZ

LEGAZPI CITY — Vice President Leni Robredo said conflicting and wrong information from heads of agencies under the Duterte administration was causing confusion and fear among Filipinos, fueling increases in prices of commodities.

She said there were instances when heads of agencies could not get their acts together and create confusion.

She cited as example the rice supply controversy.

While President Rodrigo Duterte denied there was a problem in supply, the National Food Authority Council approved a request to import more rice to boost government stock.

“People are getting confused when the government says there is a crisis in the supply of rice, while other government agencies say otherwise, but wanted to legalize rice smuggling,” Robredo said.

She said the President was focusing on critics and his underlings were feeding him wrong information.

Robredo was guest at the Sangguniang Barangay Legislative Empowerment Training attended by newly elected village councilors in the second district of Albay on Friday.

The Vice President said the country’s problems were hunger and high inflation which the President should focus on.

The President, she said, “should show to the people that he is on top of the situation by setting up directions for different government agencies to follow.”

“This is the assurance that we expect from him,” Robredo said.

In her speech to village officials, she said they should not rely solely on the help of political leaders.

She said village officials had been subservient to mayors, governors and congressmen because of lack of funds to pursue projects.

“We know for a fact that barangays have no sufficient funds so the propensity is to go to their political leaders and fall prey to their wishes,” she said.