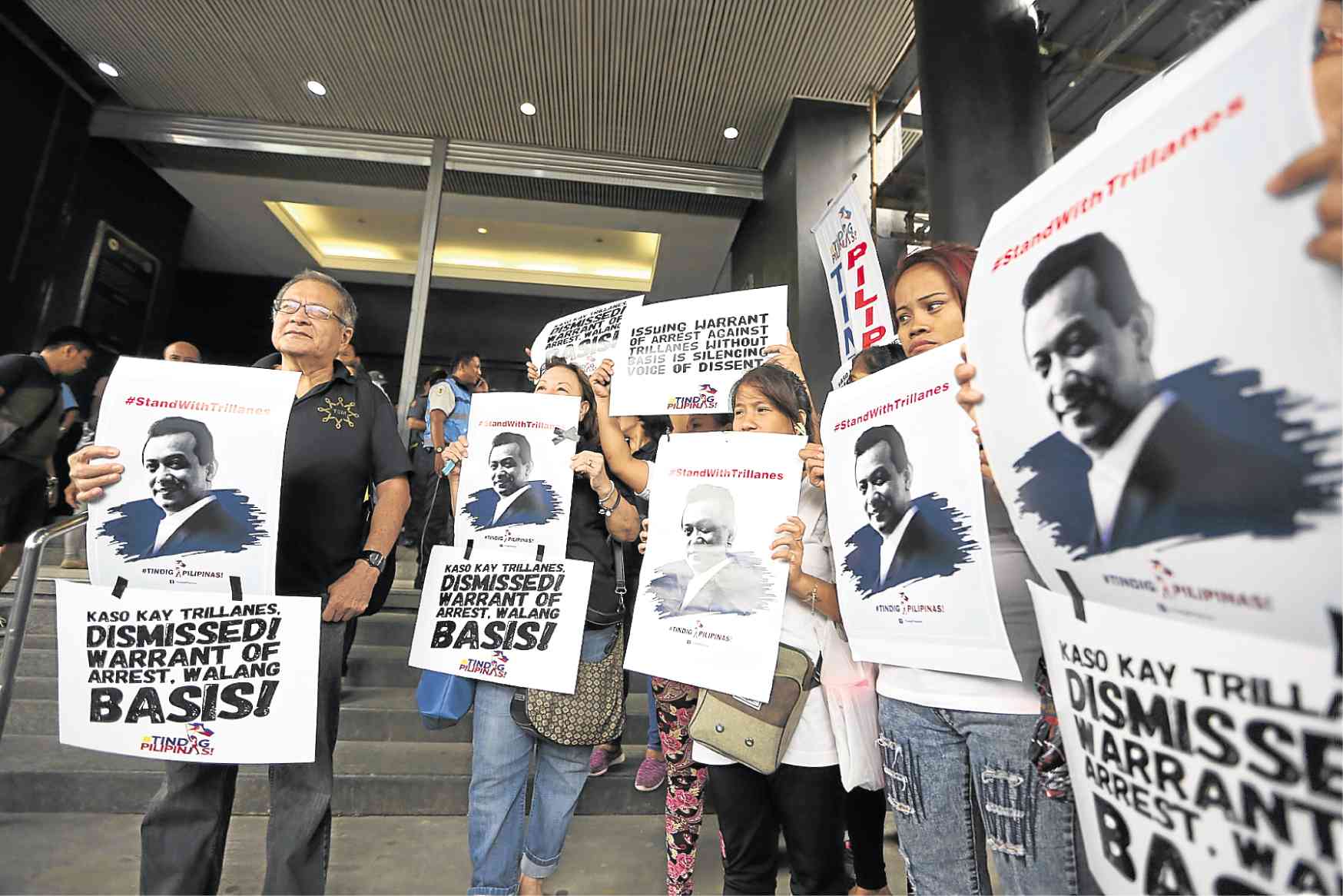 IN DEFENSE OF DUTERTE’S CRITIC Supporters of Sen. Antonio Trillanes IV demand the dismissal of the government’s motion for an arrest warrant against President Duterte’s fiercest critic on Thursday at the Makati City Regional Trial Court Branch 148, which is hearing the case. —NIÑO JESUS ORBETA

Lawyers for Sen. Antonio Trillanes IV and Department of Justice (DOJ) prosecutors on Thursday locked horns over which should be presumed valid until struck down by the court: the amnesty grant to the former military rebel or the presidential proclamation voiding it.

President Duterte, through Proclamation No. 572, voided the amnesty grant, claiming Trillanes did not apply for it and admit his guilt, and ordered his arrest.

But after Trillanes showed proof that he had complied with the requirements, President Duterte changed the reason for his order last week: The 2011 amnesty grant was signed not by then President Benigno Aquino III but by then Defense Secretary Voltaire Gazmin.

The President’s amnesty power cannot be delegated so the pardon given to Trillanes is invalid, President Duterte said.

But Aquino stepped forward on Tuesday, saying his amnesty grant to Trillanes followed the same procedure used by all of his predecessors.

If the amnesty he gave to Trillanes was void, then the amnesty grants made by all of his predecessors were also invalid, he said.

“We just pointed out that even the Palace doesn’t know what its theory is,” Reynaldo Robles, a lawyer for Trillanes, told reporters after a hearing at Makati Regional Trial Court (RTC) Branch 148 on Thursday.

“It goes to show that their new theory is an afterthought, after they saw videos and documentary evidence that the senator actually filed [an application] for amnesty,” Robles said.

The DOJ had asked the court to issue without a hearing a warrant for Trillanes’ arrest based on Mr. Duterte’s proclamation, but Judge Andres Soriano had refused.

Soriano cited due process and noted that the court dismissed the coup d’état case against Trillanes way back in September 2011.

Commenting on Trillanes’ opposition to the government’s application for an arrest warrant, the DOJ prosecutors said in their filing on Thursday that Proclamation No. 572 voided the amnesty given to Trillanes.

“Now, the new proclamation is valid until annulled so from Proclamation 572, we go forward,” Senior Assistant State Prosecutor Juan Pedro Navera said, meaning the court should pick up from where it left off in 2010 when the coup d’état case against Trillanes was promulgated.

Robles argued that Malacañang’s new basis for scrapping Trillanes’ amnesty jeopardized the pardon given by all previous administrations to hundreds of other rebels whose papers were signed by the defense secretary rather than by the President.

Presidential spokesperson Harry Roque acknowledged the risk on Tuesday, but said he did not know if the government had plans to look into the other amnesty grants.

“Our question is, why is only Trillanes being targeted?” Robles said. “Supreme Court decisions say even if a law or proclamation is valid, if it is applied with an evil eye, it runs counter to the constitutional guarantee of equal protection.”

The court gave Trillanes 10 days to submit a rejoinder and a supplemental comment, starting a back-and-forth that would take 15 days and lead to a 30-day period for the resolution of the case, according to the clerk of court, Rhodora Malabag-Peralta.

“Given the scenario or immediate need to resolve the motion, it’s up to the presiding judge whether to resolve it in a shorter time,” Peralta said.

The DOJ had also sought the revival of the rebellion case against Trillanes that the Makati RTC Branch 150 dismissed in September 2011.

Trillanes had taken the President’s order to the Supreme Court, but the tribunal found his plea to block his arrest moot, as the President had said he was not seeking the senator’s arrest without a warrant.

The tribunal, however, referred the matter to the Makati RTC for the resolution of questions of facts.

Trillanes has added former University of the Philippines law dean Pacifico Agabin and former Solicitor General Florin Hilbay to his legal team for the battle in the Supreme Court over the nullification of his amnesty.

“While I believe that the illegal voiding of my amnesty and the cases filed before the Makati Regional Trial Court related to this are part of Duterte’s political harassment, I have talked to some of the best legal minds in the country who are willing to stand for the rule of law,” Trillanes said on Thursday.

“They believe that if this illegal act would not be corrected, our country’s democracy would be in peril,” he added. —WITH REPORTS FROM TETCH TORRES-TUPAS AND LEILA SALAVERRIA

Read Next
‘Ompong’ triggers mass evacuation
EDITORS' PICK
Over 3 Million worth of prizes to be won at Smart Padala’s SENDali Manalo Promo!
Gear up and get ready to play with Yamaha Mio Gear
Acer starts the year off strong with the Aspire Vero National Geographic Edition
If elected VP, Sara Duterte will push for mandatory military service for all Filipinos
Senate bill seeks to penalize employers requiring employees to work during rest hours
Marcos-era elections: Not what his son signed up for
MOST READ
Jose Manalo’s son Benj pays tribute to late mother: ‘You’re a testimony of God’s love’
‘Sampal sa gobyerno:’ Drilon wants unvaxxed PAO chief barred from working
Vice mayor slams Vico Sotto for turning Pasig into a ‘puro palabas’ city
Bongbong-Sara tandem names 7 candidates in initial senatorial slate
Don't miss out on the latest news and information.