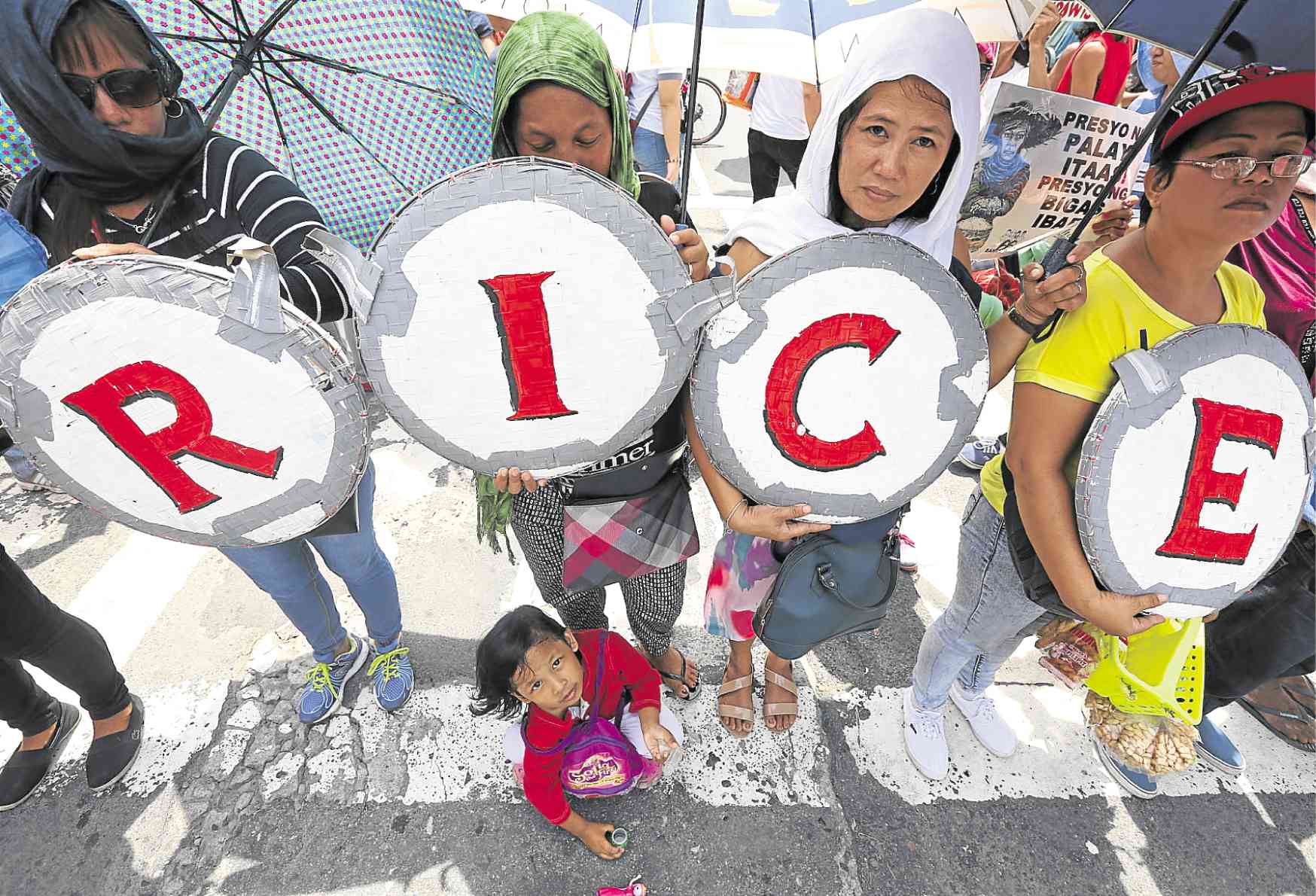 HIGH RICE PRICES Protesters denounce the rapid increase in rice prices during a rally in Mendiola on Sunday. —MARIANNE BERMUDEZ

An executive order is being drafted by Malacañang to make it easy for government to import food, including rice, in response to the spiraling costs of basic commodities.

Presidential spokesperson Harry Roque said on Wednesday that this was among the matters firmed up after Tuesday’s Cabinet meeting in which inflation was among the subjects discussed.

Roque said the economic cluster group would submit to the Office of the President a draft order removing administrative constraints and nontariff barriers on the importation of rice, fish, sugar, meat and vegetables.

“They will make the process of importing food simpler,” he said at a news conference.

Roque and Trade Undersecretary Ruth Castelo — in a separate briefing — assured the public that the country had sufficient rice supply.

He said two million sacks of rice were set to arrive before the end of the month.

All these were on top of the 12.6 million metric tons expected to be produced from this year’s harvest season.

Roque said 2.7 million sacks of rice would be allocated to Zambasulta (Zamboanga, Sulu and Tawi-Tawi), which saw prices of rice soaring amid the depleted supply of cheap NFA rice.

The government has come up with measures to respond to inflation, which rose to 6.4 percent in August but averaged 4.8 percent so far this year.

The measures, Roque said, included simplifying the licensing procedures for rice imports of the NFA and monitoring rice from ports to NFA warehouses and outlets.

The Palace will also ask Congress to immediately pass the rice tariffication bill within the month. The measure also seeks to abolish the NFA.

Roque said the government also decided to allow imported fish to be distributed in Metro Manila and other markets; set up public markets where chicken producers could sell directly to  customers; and improve logistics, transport distribution and storage of vegetables as these would reduce prices.

In a separate briefing, Trade Undersecretary Castelo said manufacturers of basic necessities and prime commodities had committed not to raise prices in three months.

She said canned sardines, noodles, milk (powder, evaporated and condensed), coffee, bottled water, canned meat, detergents and bath soaps were among the products whose prices would not go up starting Sept. 1.

Castelo also said the Department of Trade and Industry would put up Suking outlets where producers would sell directly to consumers to reduce the prices of goods like chicken.

As for sugar, the Sugar Regulatory Administration will allow direct users to import the commodity, according to Socioeconomic Planning Secretary Ernesto Pernia.

The Bureau of Customs, for its part, will prioritize the release of essential food items in the ports. —With reports from Ben O. de Vera and Jovic Yee