Duterte has put military in a predicament — Sereno 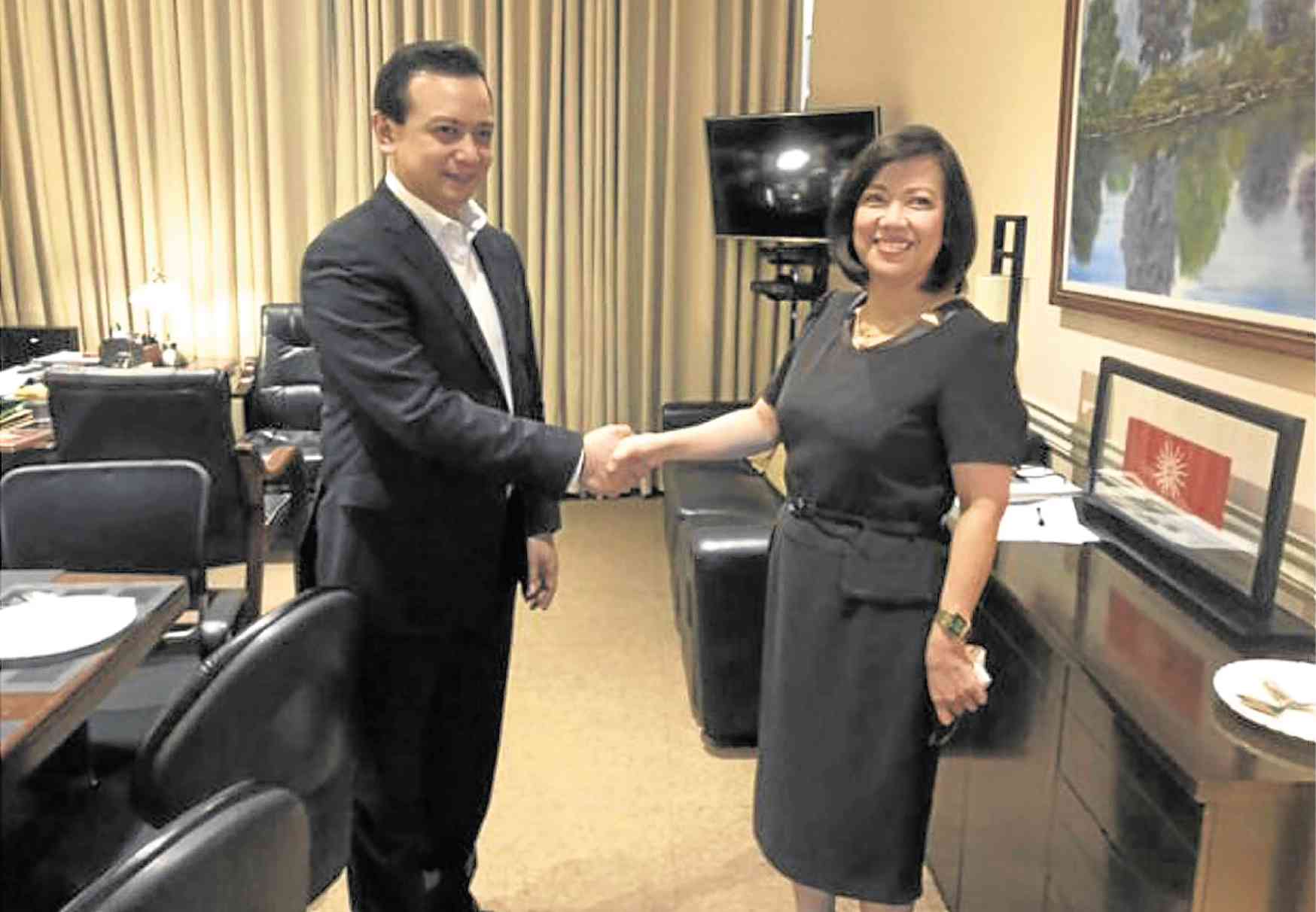 VISITING TRILLANES Ousted Chief Justice Maria Lourdes Sereno on Wednesday meets Sen. Antonio Trillanes IV, President Duterte’s fiercest critic who has taken sanctuary in his Senate office after a presidential proclamation voided his amnesty. Sereno did not disclose what she and the senator talked about. —CONTRIBUTED PHOTO

President Rodrigo Duterte created a dangerous precedent and put the military in a predicament when he voided the amnesty given to Sen. Antonio Trillanes IV as a military rebel years ago, as his move opened to invalidation the amnesty grants to many active soldiers, former Chief Justice Maria Lourdes Sereno said on Wednesday.

One of those amnestied soldiers is Gen. Carlito Galvez Jr., chief of staff of the Armed Forces of the Philippines, Sereno said.

Sen. Gregorio Honasan, chair of the Senate committee on national defense and security, could also lose his amnesty, she said.

Both Galvez and Honasan were granted amnesty for their roles in past military mutinies, and Sereno said their pardon could be voided by a new administration.

Presidential spokesperson Harry Roque said it was possible that the President’s Proclamation No. 572 would affect the other soldiers given amnesty by then-President Benigno Aquino III but he did not know if the government had plans to question their pardon.

“They could be potentially affected, but I do not know if the government will question the others similarly situated,” Roque told reporters.

Sereno spoke to journalists after visiting Trillanes in his Senate office, where he has dug in for more than a week.

The President, lashing back at Trillanes for his relentless criticism of his administration, last Tuesday ordered his arrest and trial for coup attempts against President Gloria Macapagal-Arroyo in 2003, 2006 and 2007.

The President voided Trillanes’ amnesty, saying he did not apply for it and did not admit guilt in the uprisings against Arroyo.

Fighting back, Trillanes, 47, took the President’s order to the Supreme Court, which on Tuesday found the senator’s plea to block the arrest order moot and ruled that two branches of the Makati Regional Trial Court (RTC) that dismissed the coup d’état and rebellion charges against the former Navy lieutenant should handle the question of the order’s legality.

The Makati RTC Branch 148 opens hearings on the controversy on Thursday, and Branch 150 on Friday.

No consultation with military

Sereno did not disclose what she and Trillanes talked about.

She said the President did not consult the military before voiding Trillanes’ amnesty.

“How? Imagine, he opened the idea that the amnesty granted to thousands of soldiers who had a problem with the law, not only during the time of Cory (President Corazon Aquino), but even during the time of our forebears when there was a revolution, all of these could be opened,” she added.

The uncertainty could cause divisions in the military, she said. “Its implication goes very deep and is alarming. It means that instead of the Armed Forces being united, it would be divided and there would always be the concern that what has been closed could still be opened.”

Sereno also said the President’s statements during his televised interview on Tuesday reinforced the sense that the military must do some soul-searching.

“In other words, the Armed Forces of the Philippines must remember to look beyond the term of this President, remember that the Constitution is its north star, that they are, by the terms of the Constitution, the protector of the people and that they will do nothing that is violative of that Constitution,” she said.

The President uses the possessive pronoun “mine” when describing the military and the police, she noted.

“I hope he does not come to the point where he says the taxpayers’ money is his as well,” she said.

The military, she said, should remember that the financial benefits that Malacañang claims the soldiers have received come from taxpayers.

Getting these benefits does not mean they have to obey a questionable order, she added.

Galvez reaffirmed the military’s loyalty to the Constitution.

“I recommit to the nation the unity and firm resolve of the AFP for an unflinching loyalty to the Constitution and the duly constituted authorities,” the AFP chief of staff said in a statement issued on Wednesday.

For its part, the Philippine National Police denied claims that there were officers’ groups that backed Trillanes.

PNP Director General Oscar Albayalde, however, said the police were looking into the President’s claim that the Magdalo group of pardoned military mutineers was plotting with communist rebels to oust him by October.

Magdalo had already denied the President’s claim, but the President repeated it in a televised interview with his chief legal counsel, Salvador Panelo, on Tuesday.

The President also told the soldiers that they were free to stage a mutiny if they believed in Trillanes, a comment that the senator interpreted as inciting to sedition.

“That is inciting to sedition, an impeachable offense,” Trillanes told reporters on Wednesday.

In Malacañang, Roque advised Trillanes to go home, reminding the senator that the President had said he would not be arrested without a warrant.

“Go home, because it’s not right that the people [are] paying for your board and lodging there,” Roque said.

Magdalo Rep. Gary Alejano said the President was “insecure” and appeared to be goading the military to take over.

“[He’s] upset and reproaching the [military]. In fact, he’s challenging them to stage a coup d’état. [That’s not good], because he’s inciting them to resort to extraconstitutional action,” Alejano said. —WITH REPORTS FROM CHRISTINE O. AVENDAÑO, JEANNETTE I. ANDRADE, JAYMEE T. GAMIL, MATTHEW REYSIO-CRUZ, JEROME ANING AND AP

Property lessons amid the COVID-19 pandemic