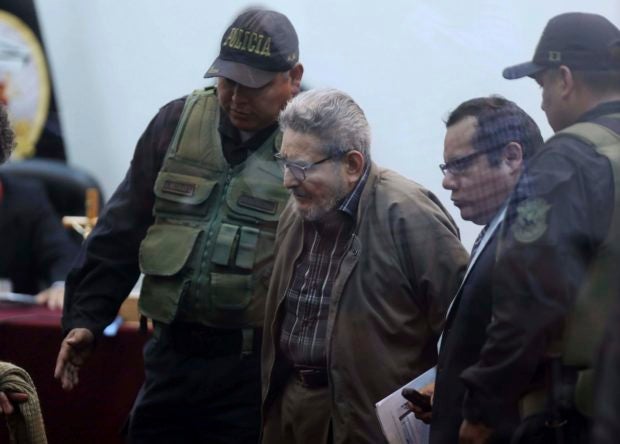 In this photo taken through a window, Abimael Guzman, founder and leader of the Shining Path guerrilla movement, arrives to court at a military base in Callao, Peru, Tuesday, Sept. 11, 2018. On Tuesday, the historic leader of the terrorist group Shining Path will be sentenced for his role in a 1992 car bomb that killed 25 people in Lima. (AP Photo/Martin Mejia)

LIMA, Peru — A Peruvian court convicted and gave a second life sentence to imprisoned Shining Path leader Abimael Guzman on Tuesday for a 1992 car bombing in the capital that killed 25 people and injured 155.

The 83-year-old Guzman is already serving a life sentence for a 1983 massacre in an Andean village. The Maoist-inspired group began its fight against Peru’s government in 1980 but was badly weakened by the 1992 capture of Guzman and many of its other leaders.

In their ruling on Tuesday, the judges sided with prosecutors’ claims that Guzman masterminded the deadly car bombing in a middle-class Lima neighborhood.

The attack was part of a wave of car bombings in Lima that came as the Shining Path focused its attacks on Peru’s capital.

Guzman’s defense had argued that he nothing to do with the attack.

A truth commission found that between 1980 and 2000 fighting among rebel groups, the government and self-defense patrols left up 70,000 dead.  /kga