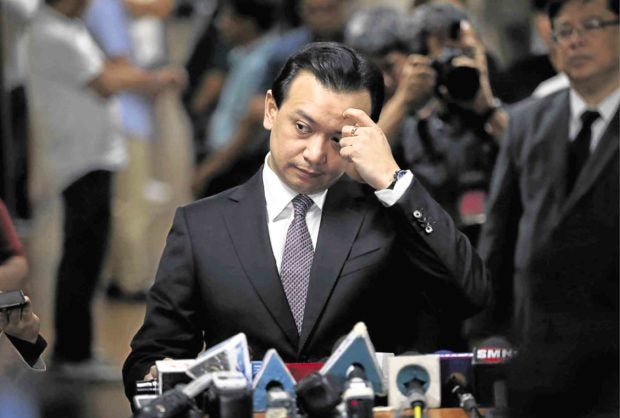 Taking notice of President Rodrigo Duterte’s statement that Sen. Antonio Trillanes IV would not be jailed without a warrant, the Supreme Court on Tuesday declined to issue an order blocking the arrest of the government’s fiercest critic in Congress.

The Supreme Court also did not rule on the question of the legality of Proclamation No. 572, by which the President voided the amnesty given to Trillanes as a military rebel in 2011.

The President’s claims in the proclamation that Trillanes did not apply for amnesty and admit guilt in the military uprisings against President Gloria Macapagal-Arroyo in 2003, 2006 and 2007 “appear to be factual in nature” so these have to be evaluated by the trial courts or the Court of Appeals as the “trier of facts,” the high court said.

“Hence it is appropriate that the Makati [courts] should be given leeway in exercising their concurrent jurisdiction to hear and resolve . . . the legality of Proclamation 572,” it said.

The ruling came a day after the Integrated Bar of the Philippines (IBP), the largest organization of the country’s lawyers, urged the courts to resist “creeping incursions” on their independence and warned of judicial chaos if they upheld Proclamation No. 572.

In a statement issued on Monday, the IBP expressed alarm over the “audacity to publicly arrest and incarcerate” Trillanes for offenses that were canceled by the amnesty given to him by President Benigno Aquino III and Congress in 2011.

Following the presidential proclamation, the Department of Justice (DOJ) asked Makati Regional Trial Court Branches 148 and 150 to issue warrants for Trillanes’ arrest and resume criminal proceedings against him.

Both courts denied the DOJ’s requests for warrants without a hearing, saying it would violate Trillanes’ right to due process.

The IBP said amnesty “cannot be simply dissolved by the invocation of the words ‘void ab initio’ (void from the start) as though it were some magical incantation that can nullify vested rights.”

The move against Trillanes, it said, “runs roughshod over the constitutional guarantee against double jeopardy,” or holding a person to answer twice for the same offense.

The IBP said the judiciary could be subjected to an “anomalous situation” in which one court could uphold the amnesty and another rule to void it.

The group accused the DOJ of “forum shopping” and “potential mischief” by simultaneously petitioning the two Makati RTC branches that had dismissed the cases against Trillanes to order his arrest based on the President’s proclamation.

Although it did not grant Trillanes’ petitions, the Supreme Court ordered the government officials tasked with carrying out the President’s order 10 days to comment on the ruling.

Justice Secretary Menardo Guevarra said he was “very happy” that the Supreme Court denied Trillanes’ petition for a preliminary injunction or a temporary restraining order.

He said the two Makati RTC branches had given Trillanes “the opportunity to be heard” through the hearings on Thursday and Friday.

Presidential spokesperson Harry Roque said there was no more legal impediment to the enforcement of the proclamation, although he would want to see what the President’s had to say about the high court ruling.

In a speech after returning from visits to Israel and Jordan on Saturday, theh President said he was not seeking the arrest of Trillanes without a court-issued warrant, a pronouncement that the Supreme Court recognized as a public commitment.

The high court also recognized the statement of the Armed Forces of the Philippines that it was deferring court-martial proceedings against Trillanes until the courts could resolve the amnesty row. —With reports from Leila B. Salaverria, Christine O. Avendaño and AP