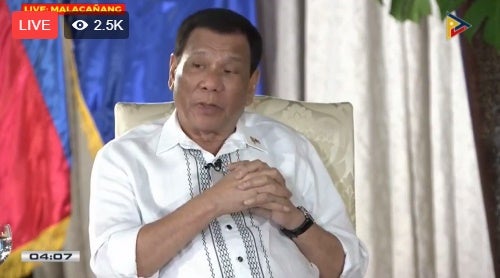 President Rodrigo Duterte on Tuesday claimed that the martial law declared in Mindanao has “lessened cases of criminality” in the region.

“It has lessened the criminality at large. The only way to confirm that is to conduct a survey. Maybe they can conduct an interview,” Duterte said in his têtê-a-têtê” with Presidential Legal Counsel Salvador Panelo in Malacañang.

This comes after Malacañang earlier said it is considering extending martial law in Mindanao, a declaration that has been in place since firefights erupted in Marawi City in May last year.

Talks of extending martial law began when Executive Secretary Salvador Medialdea said that extension of martial rule was an optional move of the government after the twin bombing in Isulan, Sultan Kudarat.

For her part, Vice President Leni Robredo said she is against extending martial law, noting that it has so far failed to stop terrorist activities in Mindanao. /jpv

Palace: Too early to talk about extension of martial law in Mindanao