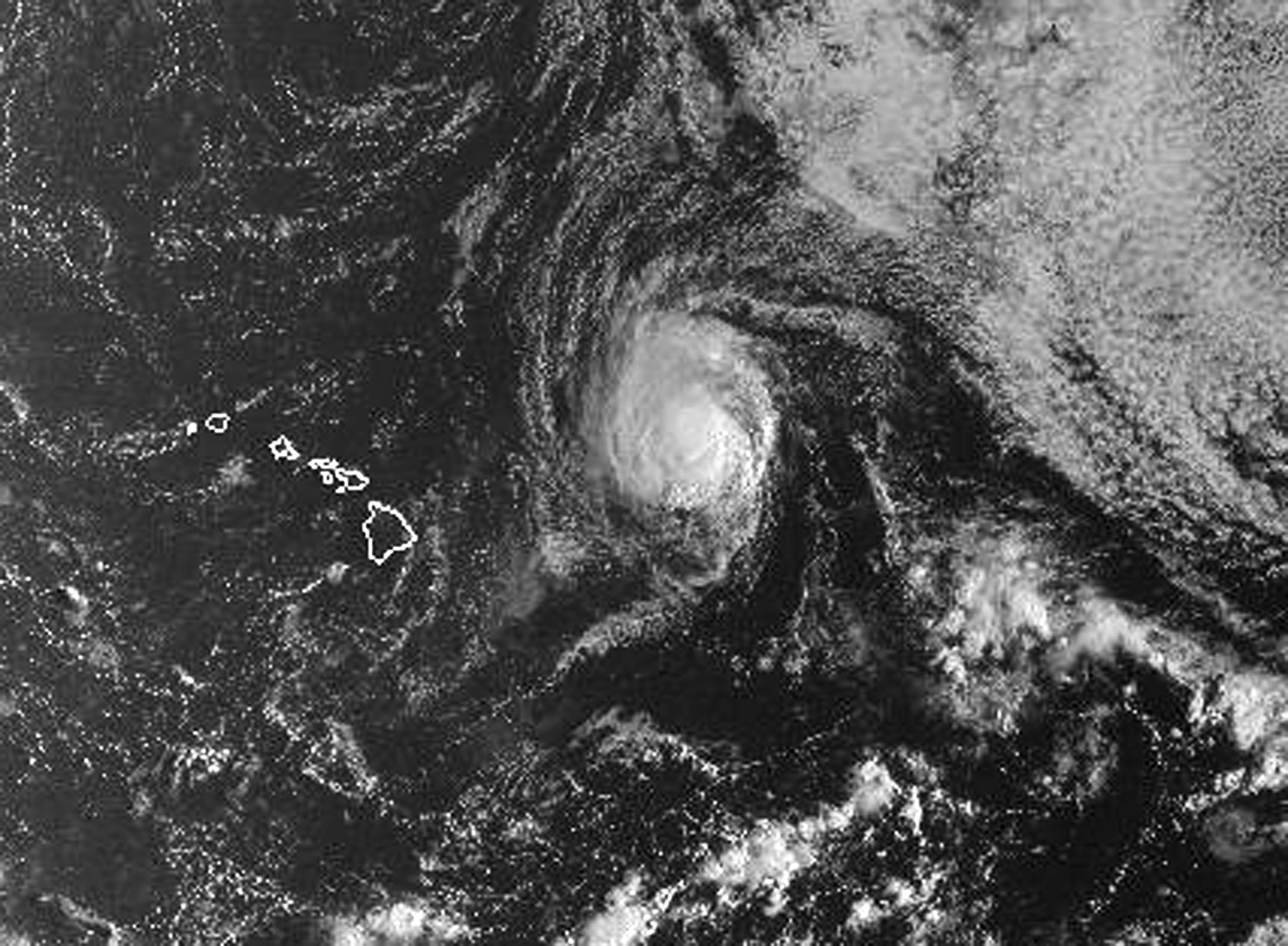 This satellite image from the National Oceanic and Atmospheric Administration shows Hurricane Olivia east of Hawaii at around 6:30 a.m. local time Monday, Sept. 10, 2018. Olivia is expected to approach Hawaii in the coming days as either a high-end tropical storm or a low-end hurricane. (NOAA via AP)

HONOLULU — Hawaii officials on Monday urged residents and visitors to be prepared as a strong tropical storm approached the island state.

“We don’t know what it’s going to look like as Olivia approaches the Hawaiian Islands. So please, folks, don’t let your guard down,” Caldwell said.

He said crews were working hard to clear debris from streams so they wouldn’t block expected increased water flows.

Forecasters say Olivia may drop 10 to 15 inches (25 to 38 centimeters) of rain on the Big Island and Maui County, though some areas could get 20 inches (50 centimeters.)

“By having people around to monitor the situation, to look for the signs, we can respond much quicker,” Okabe said. The county is also preparing to open shelters.

Lane dumped more than 52 inches of rain on the Big Island, marking the nation’s second-highest rainfall total for a tropical cyclone since 1950. Nearly 40 people had to be rescued from floodwaters, while about 200 people reported damage to their homes on the Big Island because of Lane.

Hurricane Harvey, which deposited more than 60 inches of rain in Texas last year, is the nation’s wettest tropical cyclone in the past seven decades.

The ground has dried since Lane so there isn’t concern about it being already saturated before the Olivia arrives, Okabe said.

Keith Regan, managing director of Maui County, urged visitors to stay away from the town of Hana and the narrow winding road leading there. Hana Highway is a popular route for tourists to the island and could suffer some of the biggest effects of the storm.

Hawaii Gov. David Ige says the state would be placing road equipment in Hana before the storm arrives so crews will be ready to respond if the highway gets blocked.

Oahu and Kauai are forecast to receive 3 to 6 inches (7 to 15 centimeters) of rain, though precipitation could be as much as 8 to 10 inches (20 to 25 centimeters) in some areas.

The forecast shows the center of the storm passing through a channel between the Big Island and Maui. But officials stressed there’s uncertainty about the storm’s exact path.

“It’s important that we don’t focus on the forecast track. This storm could directly impact every area of the state from South Point all the way to the north shore of Kauai,” said Tom Travis, the administrator of the Hawaii Emergency Management Agency.

The Pacific Daily News reports government agencies were conducting damage assessments and beginning to clear roads. About 80 percent of the U.S. territory was without power.

Hurricanes are spawned east of the international date line. Typhoons develop west of the line.

Read Next
Police woman charged for shooting black man in wrong apartment
EDITORS' PICK
Hidilyn Diaz wins weightlifting gold in Tokyo Olympics
Duterte: When I said I will fight drugs in 6 months, I thought it was like in Davao
Harnessing technology for quality education
Connect to PH’s fastest network with new Signature Plan Lite at only P599 per month
Tips for a cheerful life
Duterte warns of possible lockdown if ‘more aggressive’ Delta variant spreads
MOST READ
Hidilyn Diaz wins weightlifting gold in Tokyo Olympics
Go to war with China over West PH Sea? It will be a ‘massacre’, says Duterte
Hidilyn shoots not only for gold but also for permanent place in PH sports history
Nesthy Petecio topples top-ranked foe, nears Tokyo Olympics medal
Don't miss out on the latest news and information.