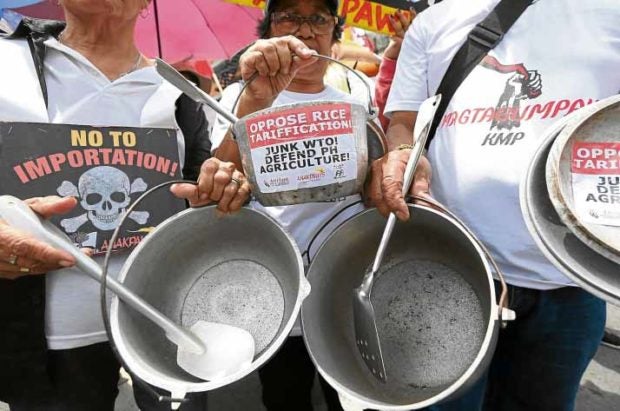 NOISE PROTEST Farmers bang empty pots during a rally in Mendiola to denounce the rapid increase in rice prices, which are now beyond the reach of poor consumers. —MARIANNE BERMUDEZ

Labor groups urged presidential spokesperson Harry Roque on Monday to go to market — a nod to a nursery rhyme — to get a sense of how Filipinos were hard-pressed in stretching their budgets amid soaring prices of basic commodities.

They issued the challenge after Roque said on Friday that while the 6.4-percent inflation rate in August was higher than usual, “it’s nothing to be worried about.”

The public may not find comfort in the Palace official’s assurance as fuel prices have increased anew, a development that can thwart efforts to tame inflation.

For the fifth week in a row, oil companies in the country increased pump prices. Prices of diesel, gasoline and kerosene went up by 65 centavos per liter starting 6 a.m. on Tuesday.

A moderate labor group, Sentro ng mga Nagkakaisa at Progresibong Manggagawa, said Roque’s effort to downplay the impact of the high inflation was not only antipoor but also reeked of “insensitivity.”

“The inflation rate is pushing the prices of food way beyond the capacity of the majority of poor Filipinos, whether they are employed or unemployed,” said Sentro secretary general Josua Mata.

Inflation last month was the highest in nine years. It stood at 7 percent in Metro Manila and 9 percent in Bicol.

Vegetables and fish may now be out of reach of the poor because their prices, according to government data, rose nationwide in August by 19.2 percent and 12.4 percent, respectively.

In the absence of subsidized rice from the state-owned National Food Authority (NFA) in many parts of the country, commercial rice is no longer affordable to many Filipinos as its prices have hit record highs.

The shortage of cheap NFA rice prompted the local governments to declare a state of calamity two weeks ago in Zamboanga City and Tawi-Tawi province, where prices of the staple rose to up to P70 and P80 a kilo, respectively.

Roque may have nothing to worry about the rising cost of living given the status and lifestyle of his family, according to the Associated Labor Unions-Trade Union Congress of the Philippines (ALU-TUCP).

“But in the case of millions of poor Filipinos already deep in poverty, this current inflation is a cause of depression and deep anxiety for them,’’ said ALU-TUCP spokesperson Alan Tanjusay.

Tanjusay said power and high-handedness might have gone into the head of Roque “that he had lost touch of what makes poor people sing.”

“Is he living on another planet?” Magtubo said, referring to the presidential spokesperson. “It’s very difficult now to fit our low wages with the continued increase in the price of basic commodities.”

“Their incompetence is clearly part of the problem,” Mata said.

In the House of Representatives, Majority Leader Rolando Andaya Jr. urged the National Price Coordinating Council to look into reports that some unscrupulous individuals may be involved in price manipulation and “widespread hoarding.”

“In some places, inflation is higher than the national average. Rice and gas prices have shot through the roof in many provinces where the cost of transporting them is expensive,” the Camarines Sur lawmaker said in a statement.

Besides a depleted NFA buffer stock and hoarding, rising fuel prices, weakening of the peso, low supply of certain commodities and the Tax Reform for Acceleration and Inclusion (TRAIN) Act were blamed for the surging cost of living.

The TRAIN law, which took effect on Jan. 1, jacked up or slapped new taxes on goods, such as oil, cigarettes, sugary drinks and vehicles, to compensate for raising the cap on tax-exempt personal income to an annual pay of P250,000.

Prices of diesel have gone up 25 times this year but have gone down 11 times for a net increase of P11.80 per liter, according to the Department of Energy.

Prices of gasoline have risen 26 times but have fallen 10 times for a net increase of P11.47.

Seeking to ease fears that inflation might worsen in the coming months, Deputy Speaker Raneo Abu said on Monday that rising prices were just a “birth pain” of the TRAIN law,

“Like in the delivery of a baby, we will all feel happiness after the child’s birth,” the Batangas lawmaker said at a news briefing. “As they say, we should relax for now. We will eventually feel its gains.”

Half cup of rice

Ako Bicol Rep. Rodel Batocabe said the TRAIN law should not be blamed for the high inflation.

Batocabe said the people had been complaining about the rising prices of goods because “they were used” to the low level of inflation during the Aquino administration.

“Maybe we should tighten our belts some more,” he said. “We should also stop wasting rice. If you cannot finish a cup of rice, then just buy half a cup instead.”