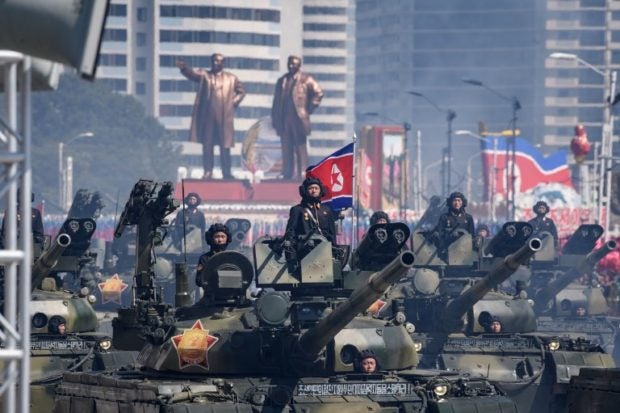 Korean People’s Army (KPA) tanks take part in a military parade on Kim Il Sung square in Pyongyang on September 9, 2018. North Korea held a military parade to mark its 70th birthday, but refrained from showing off the intercontinental ballistic missiles that have seen it hit with multiple international sanctions. AFP

Pyongyang, North Korea — North Korea refrained from displaying its intercontinental missiles in a massive military parade through Pyongyang celebrating its 70th birthday Sunday — a conspicuous absence touted by US President Donald Trump as “a big and very positive statement”.

Thousands of North Korean troops marched through Pyongyang, followed by artillery and tanks but not the long-range missiles that have been a bone of contention in its nuclear tensions with Washington.

“This is a big and positive statement from North Korea. Thank you To Chairman Kim. We will both prove everyone wrong!” Trump tweeted, referring to North Korean leader Kim Jong Un.

“There is nothing like good dialogue from two people that like each other! Much better than before I took office.”

Kim also used the parade to show off his friendship with China, raising the hand of President Xi Jinping’s envoy as they saluted the crowd together afterwards.

The Democratic People’s Republic of Korea (DPRK), as the North is officially known, was proclaimed on September 9, 1948, three years after Moscow and Washington divided the peninsula between them in the closing days of the Second World War.

Such set-piece dates are a mainstay of the North’s political calendar, and have for years been opportunities to demonstrate progress in its quest for a missile capable of delivering a nuclear warhead to the United States.

But too militaristic a display this time might have risked upsetting the recent diplomatic dalliance on the peninsula, after Kim’s Singapore meeting with Trump in June and his third summit with the South’s President Moon Jae-in due in Pyongyang later this month.

After a 21-gun salute, dozens of infantry units marched through Kim Il Sung Square, some in night-vision goggles or wielding rocket-propelled grenade launchers, as the current leader — the founder’s grandson — looked on from a rostrum.

Li Zhanshu, one of the seven members of the Chinese Communist party’s Politburo Standing Committee, the country’s most powerful body, sat next to him, the two of them occasionally exchanging comments.

Finally came the missiles, the traditional climax of the parades. But the only ones on show were short-range battlefield devices, the Kumsong-3 anti-ship cruise missile, and the Pongae-5 surface-to-air weapon.

There was no sign of the Hwasong-14 and -15 rockets that can reach the mainland United States and changed the strategic balance when they were first tested last year.

“It looks like the North Koreans really tried to tone down the military nature of this,” said Chad O’Carroll, managing director of Korea Risk Group.

Any display of longer-range missiles would have cast doubt on North Korea’s commitment to denuclearization, he added.

Pyongyang has not publicly stated a willingness to give up the weapons it has spent decades developing at huge political and financial cost, but it has been on a diplomatic charm offensive for months.

In April, Kim declared that the North’s nuclear program had been successfully completed and “socialist economic construction” was the new strategic priority.

In a speech Sunday, ceremonial president Kim Yong Nam lauded the country and its army as “the strongest in the world”, but did not mention nuclear weapons.

And immediately after the parade thousands of citizens rallied through the square, alongside floats displaying economic themes and calls for Korean reunification — the peninsula has remained split since the 1950-53 Korean War ended in an armistice rather than a peace treaty.

Diplomatic invitations for the anniversary went out around the world, but the only head of state who attended was Mauritanian president Mohamed Ould Abdel Aziz — although AFP spotted French actor Gerard Depardieu seated in a section below the main gallery.

Afterwards Kim and Li saluted the cheering crowd, the North Korean raising his guest’s hand into the air.

Beijing is its neighbour’s key diplomatic protector and trade partner, and after years in the deep freeze over the North’s weapons ambitions ties have warmed rapidly this year, with Kim visiting China three times to meet President Xi Jinping.

Speculation that Xi might reciprocate for the anniversary did not come to pass — Hu Jintao remains the last Chinese president to visit in 2005 — but O’Carroll said Pyongyang appeared to want to promote its friendship with Beijing.

“China is still a very important player and its presence here with such a high level delegation is intended in some way to remind the US of that,” he said.

Washington is seeking the “final, fully verified denuclearization of North Korea”, while Pyongyang has only publicly affirmed its commitment to working towards the denuclearization of the Korean peninsula, a euphemism open to interpretation on both sides.

The process has become bogged down in recent weeks, with the North demanding a formal declaration that the Korean War is over, and the South’s Moon caught between his neighbor and his ally.

But some things do not change.

Many of the tanks and other vehicles at the parade still bore a slogan on the front: “Destroy the US imperialist aggressors, the sworn enemy of the DPRK people!” /cbb