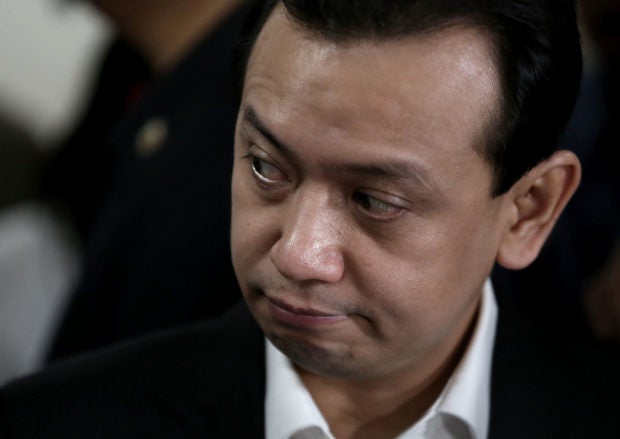 President Rodrigo Duterte’s critics on Sunday scoffed at his claim of a plot to overthrow him by October, calling him “paranoid” and “crazy.”

Sen. Antonio Trillanes IV, holed up in the Senate building since Tuesday after Mr. Duterte voided the amnesty given to him as a military mutineer in 2011, had a few but sharp words about the President’s claim: “It’s all in his mind. He’s already paranoid.”

Magdalo Rep. Gary Alejano, who visited Trillanes in his Senate office on Sunday morning, agreed, saying the President had gone “praning,” or crazy.

Ifugao Rep. Teddy Baguilat, one of the few remaining members of the Liberal Party (LP) in the House of Representatives, said the President might have been thinking of Oktoberfest, the monthlong beer festival in Germany, not “Red October,” a reference to the 1917 communist uprising in Russia.

“We in the Liberal Party will never plan to oust the President because we respect the Constitution,” Baguilat said in a text message.

The President spoke about the alleged plot to overthrow his administration in a speech at the Davao international airport on Saturday after arriving from official visits to Israel and Jordan.

He claimed that the “yellows” (a reference to the LP), Trillanes and communist insurgents were colluding to bring him down from power by October.

The President gave no details but, addressing the military, he said he had received an intelligence report from “sources from a foreign power” detailing the plot.

“It’s Trillanes, the yellows and the [Communist Party of the Philippines, or CPP] Politburo. The problem with Trillanes, he is also playing with the communists,” he said.

Trillanes denied the allegation, saying he was instrumental in the passage of laws that benefited soldiers.

“If I can only make a list, we’ll probably have to stay here the whole day. The soldiers know that,” he said.

If anybody has collaborated with the communists, it would be the President, Trillanes added, referring to the chief executive’s helping the insurgents when he was mayor of Davao City and then appointing leftists to his Cabinet after being elected President in 2016 on the recommendation of the National Democratic Front of the Philippines.

The CPP had no comment on the President’s claim on Sunday, but it compared the President to the late dictator Ferdinand Marcos for ordering the arrest of his fiercest critic, Trillanes.

In a statement on its website, the CPP also said the President was only fomenting “further division and dissent” among key military and police officials in ordering Trillanes’ arrest.

“He abused his power and trampled on the legal processes of his own government,” it said.

“On its own, either by its incompetence or corruption, the government is doing a good job of destabilizing itself,” Pangilinan said.

The LP chief said the accusations of destabilization being hurled at the opposition were downright false because dissent was not the same as destabilization.

Alejano said the opposition had no desire to remove Mr. Duterte from office through illegal means.

Instead of making such claims, Mr. Duterte should deal with the country’s immediate problems, the lawmaker said.

Alejano said the real ally of the communist rebels was Mr. Duterte, who had been vocal in his support for the insurgents during his days as mayor of Davao City.

“That’s his ouster plot. And at one time, he said the Central Intelligence Agency wanted to remove him. So the communists and the CIA are conniving to remove him?” he said.

In a radio interview, the lawmaker said Mr. Duterte was conducting a loyalty check among military officials after voiding Trillanes’ amnesty.

In his arrival speech on Saturday, Mr. Duterte told the military and the police that he expected them to be loyal to him.

He said Calida, whom the President identified as the one who initiated the review of Trillanes’ amnesty, did a “sloppy work” when he asked for a certification from the division chief of the military records office instead of coordinating with senior military officials.

Alejano said Calida did not seek clearance from Lorenzana regarding the senator’s military records.

“They used government instruments in mounting a personal revenge against a critic of President Duterte,” he said.

Mr. Duterte should apologize for wrongfully voiding Trillanes’ amnesty, he said. “The Duterte administration must admit that they are at fault.”

Former President Benigno Aquino III said last week that it was he who approved the grant of amnesty to Trillanes.