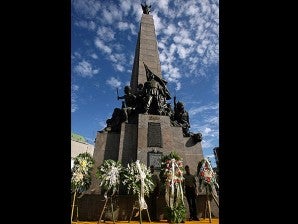 MANILA, Philippines — Caloocan City officials led a short ceremony at the Bonifacio Monument in Caloocan City on Wednesday marking the 148th birth anniversary of the hero Andres Bonifacio who is credited with founding the Filipino revolutionary movement, Katipunan.

Mayor Enrico “Recom” Echiverri and other Caloocan officials offered flowers at the foot of the monument, considered one of the most important cultural and historical landmarks of the country.

The ceremony was  delayed, however, as Echiverri came an hour late for a ceremony that was supposed to start at 7 a.m.

Hundreds of residents and students waited under the shade of blue tents  plastered with the mayor’s name.

When the program began,  a 21-gun salute was rendered and sets of flowers were laid at the foot of the monument.

Echiverri used his speech to boast about what he said was a “modern and reformed Caloocan.” He  did not elaborate with concrete details, however.

The mayor added that Bonifacio was a role model and everybody should emulate “his patriotism and unwavering courage in defending his country.”