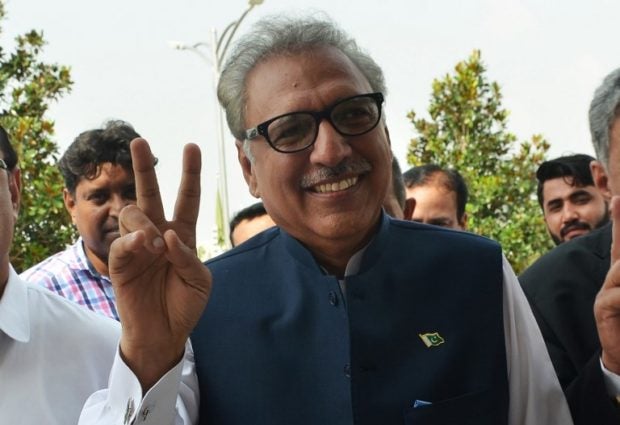 Leader of ruling Pakistan Tehreek-e-Insaf (PTI) party and Pakistan’s new President Arif Alvi flashes the victory sign on his arrival before the president election at the National Assembly in Islamabad on September 4, 2018. AFP

ISLAMABAD, Pakistan — Pakistan’s new President Arif Alvi was sworn in at a ceremony in Islamabad on Sunday, concluding the country’s peaceful transfer of power to its new government after a turbulent election campaign.

A vote this week saw him elected by more than a thousand lawmakers from both houses of parliament and the four provincial assemblies.

Khan and his cabinet attended the ceremony led by Chief Justice Saqib Nisar, along with armed forces chiefs and senior Islamabad-based diplomats.

Alvi swore to “bear true faith and allegiance to Pakistan” and to carry out his duties “in the interest of the sovereignty, integrity, solidarity, well-being and prosperity of Pakistan.”

A former dentist, Alvi has been a key confidante of Imran Khan on both party and national issues.

He served as the PTI’s secretary general for eight years from 2006, and was elected an MP in the southern megacity of Karachi in 2013, winning re-election in the July vote.

A father of four and enthusiastic Twitter user, Alvi was shot and wounded during a protest against military dictator Ayub Khan in Lahore in 1969. He still has a bullet embedded in his right arm.

The election of the PTI marks the end of decades of rotating leadership between the ousted Pakistan Muslim League-Nawaz (PML-N) and the Pakistan Peoples Party (PPP), punctuated by periods of army rule.

But Khan and his cabinet face a myriad of challenges including a faltering economy, militant extremism, water shortages, and a rapidly growing population negating growth in the developing country.