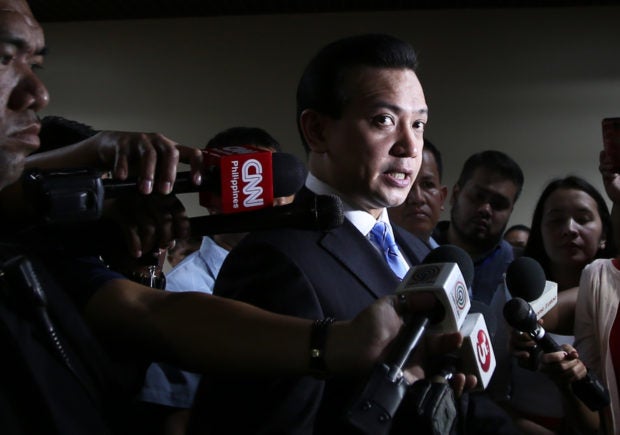 Sen Antonio Trillanes lV in an ambush interview by members of the press before the Senate regular session. INQUIRER PHOTO/JOAN BONDOC

CEBU CITY — The law dean of the University of San Carlos in Cebu City—one of the premiere law schools in the country—questioned the cancelation of the amnesty granted to Senator Antonio Trillanes IV, and urged the Supreme Court (SC) to step in and show its independence.

“First, there was that unilateral withdrawal from the International Criminal Court. Now, there is this unilateral cancellation of Trillanes’ amnesty,” noted lawyer Joan Largo in her post on Facebook.

She said President Rodrigo Duterte has apparently encroached with the powers of other branches and units of government.

“As is becoming glaring by the day, this President has been arrogating unto himself powers he does not exclusively possess, bastardizing all mechanisms of checks and balances so essential in a functioning democracy,” the law dean said.

Largo called on the highest court of the country to do its role as the final arbiter of law and justice.

“We trust that the De Castro Court will show to us what judicial independence means by putting this emerging dictator in his rightful place in what we hope is still a republican government. Our Supreme Court exists especially for moments like these,” she added. /kga