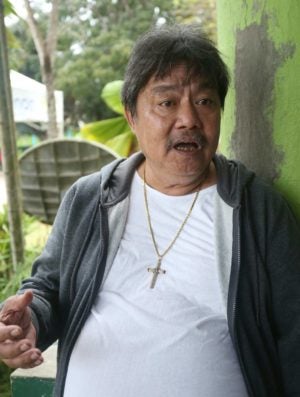 This file photo shows Ronda Mayor Mariano Blanco answering questions from the media regarding the death of his nephew, Jonnah John Ungab. Seven months after Ungab’s death, Mayor Blanco was shot dead by four armed men while he was sleeping inside his office in the town hall on Wednesday morning, Sept. 5, 2018. CDN FILE PHOTO

Investigator SPO1 Dionisio Tagupa, of the Ronda Police Station, said Blanco was sleeping inside the mayor’s office at the municipal hall when the assailants shot him.

Based on the report by two job order watchmen, four unidentified persons suddenly arrived on board a white van, pointed their guns at them and instructed them to drop on the ground.

“After a second, a burst of fire was heard from the mayor’s office and then the unidentified persons left,” said Tagupa.

He said the employees went to the mayor’s office and found the bloodied body of Blanco.

His killing came seven months after his nephew, Ronda Vice Mayor Jonnah John Ungab, was gunned down by unknown assailants outside Cebu City’s courthouse in February 2018.

Blanco had been changing his routine, including sleeping in his office, after he was publicly named by President Rodrigo Duterte in 2016 as among alleged narco-politicians.

In an earlier interview, Blanco said he was worried about his safety after his name was dragged into the illegal drugs trade.

“I’m afraid I might be assassinated. I just hope that they will understand that I had never been involved in illegal drugs,” the 58-year-old mayor said.

“I’m really shocked. I have been serving the town for 22 years now, and my name was never besmirched until this issue came,” he added.

In November 2017, the National Police Commission (Napolcom) stripped Blanco off his supervisorial power over the police in Ronda for his alleged involvement in the illegal drugs trade.

Due to the order, Blanco could not choose the town’s chief of police, inspect police units, and exercise other functions over the local police.

Napolcom spokesman Risty Sibay earlier explained that only President Duterte could reinstate the mayor’s authority over the police in Ronda.

He said Duterte received “intelligence reports” that Blanco was involved in the drug trade.

Blanco first served as councilor of Ronda in 1995 before he was elected mayor in 1998. He held the position for nine years.