Senators give sanctuary to colleague 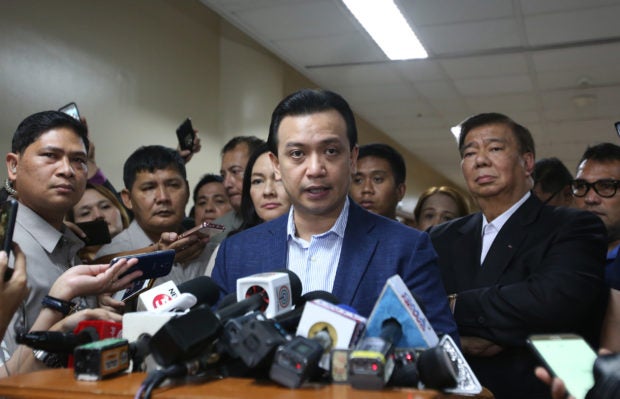 Senator Antonio Trillanes IV answers questions from media after giving his statement on the revocation of his amnesty at the Senate. Also in photo are Sen Risa Hontiveros, Sen Franklin Drillon and Sen Bam Aquino. INQUIRER PHOTO/JOAN BONDOC

Government security forces found themselves cooling their heels outside the Senate building on Tuesday after the senators decided to give sanctuary to Sen. Antonio Trillanes IV, whom President Duterte had ordered arrested after revoking an amnesty given to the former rebel military officer who had become one of his fiercest critics.

Given amnesty in 2011 by then President Benigno S. Aquino III while being tried for participating in attempts to overthrow the previous administration headed by Gloria Macapagal-Arroyo, Trillanes has slammed extrajudicial killings in Mr. Duterte’s bloody war on drugs, accused him of corruption, and linked one of his sons to drug dealing and smuggling, earning a pledge of revenge from the President.

Trillanes became the second presidential critic to be threatened with detention, after Senator Leila de Lima, who is behind bars on what she says are false drug charges brought against her in retaliation for her investigation of extrajudicial killings in Davao City during Mr. Duterte’s term there as mayor and the thousands of killings in his take-no-prisoners war on drugs.

After initially saying he would not resist arrest, Trillanes told reporters that he would stay in the Senate building while his lawyers “exhaust legal remedies” to void what he called Mr. Duterte’s “illegal and unconstitutional” order to revoke his amnesty.

The government said Mr. Duterte canceled the amnesty because Trillanes, a former Philippine Navy officer, did not complete the requirements of filing an official application and admitting guilt.

But Trillanes, speaking at the plenary session on Tuesday afternoon, showed news reports of his application, including a dzRH video taken on January 6, 2011, showing him submitting his application for amnesty.

He said the form carried his admission of the charges against him.

“This is the biggest foolishness that Duterte did today,” Trillanes said, thanking the Senate leadership “for protecting the institution.”

Senate President Vicente Sotto III said he ordered Senate Sergeant at Arms Jose Balajadia to keep the arresting team out of the Senate building “to preserve the dignity of the Senate.”

Sotto, however, clarified that he did not exactly take Trillanes into his custody.

No arrest in Senate

“Outside Senate premises, that’s no longer our concern,” he said.

The members of the chamber crossed party lines to defy Mr. Duterte’s Proclamation No. 572, the order to arrest Trillanes.

“There will be no arrest within the Senate premises of our colleague,” said Majority Leader Juan Miguel Zubiri.

“There is even no case, with more reason that constitutional protection will apply,” Drilon said.

He said the courts dismissed the cases against Trillanes after determining that the amnesty had been validly granted.

Drilon warned that reopening Trillanes’ cases would be double jeopardy, or trying him again for charges that had already been dismissed.

Senators Francis Pangilinan and Risa Hontiveros said Mr. Duterte’s order was unconstitutional because it did not have the concurrence of Congress.

In a statement, Vice President Leni Robredo blasted the order, saying it was “another proof that this administration will stop at nothing to silence anyone who opposes it.”

Opposition members of the House of Representatives also rallied behind Trillanes.

Former Solicitor General Florin Hilbay, a professor of constitutional law, said the President had “no unilateral constitutional authority to nullify an amnesty given and accepted years ago.”

The Department of the Interior and Local Government, which oversees the Philippine National Police, said it would wait for a court order before allowing the police to arrest Trillanes. —WITH REPORTS FROM MARLON RAMOS, MELVIN GASCON, JAYMEE T. GAMIL AND AFP