She may be a Senator, but to me, she is ‘Ate’ Grace, my sister, says Lovi | Inquirer News

She may be a Senator, but to me, she is ‘Ate’ Grace, my sister, says Lovi 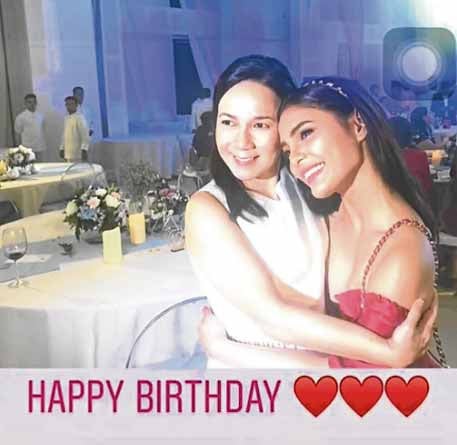 SISTER ACT Sen. Grace Poe parties with her sister, actress Lovi Poe, as well as colleagues in the Senate and entertainment celebrities on her 50th birthday. —VIDEOGRAB FROM LOVI POE’S INSTAGRAM STORIES

Senator Grace Poe and her sister, actress Lovi Poe, rocked the night away when the senator celebrated her golden birthday on Monday night.

Letting their hair down, the sisters danced to VST and Co.’s “Rock Baby Rock” and then hugged each other in videos and photos that Lovi posted on Instagram.

Watching them with glee were Poe’s mother, veteran actress Susan Roces; her husband, Neil Llamanzares, and their children, Brian, Hanna and Nikka; and close friends and staunch supporters, who threw the party for her.

Their father, Fernando Poe Jr., called “Da King of Philippine movies” in the film industry, sought the presidency in May 2004 but lost to Gloria Macapagal-Arroyo. He died in December that year.

Grace also ran for President in the 2016 elections but lost to Rodrigo Duterte.

“Love you ate,” Lovi wrote in one of her Instagram photos.

“While to everyone else she may be Senator Grace, but to me, she is Ate Grace, my sister,” she said in a speech during the birthday celebration held at Whitespace Manila in Makati City.

Poe profusely thanked family and friends for coming together to mark a milestone in her life.

“It’s really tricky to thank all the people that you should thank in the 50 years of your life, but it’s even trickier to admit that you’re 50, but anyway, here we are today. Think of five decades, that’s a lot of days and a lot of hours and you are here today because you are part of my 50 years,” she said.

Turning to Lovi, she said: “Thank you so much. You know Lovi . . . I was really touched when she cried after noticing that I have lost a lot of weight during the [presidential] campaign . . . I’d like to tell you that I was happy when I lost that much weight.”

Poe devoted a portion of her speech paying tribute to her mother, Susan Roces.

“I’d like to thank my mom who, without her, I don’t think I would have stood a chance anywhere. She was the one who really taught me the foundations of what I believe in, of what I should do, how I should act,” she said.

“Thank you, mom, for your courage. Thank you for showing me by example that you should always be compassionate but you should also be wise…,” she added.

“I mostly dedicate this to my mom, to my husband and to my children. Thank you for standing by me. I love you.”

“What a night! Celebrating God’s goodness and faithfulness in the life of our dear colleague/ sister @sengracepoe Happiest birthday! God bless you more! #TeamSenate #FunFunFun #Vpositive,” Villanueva said in his post.