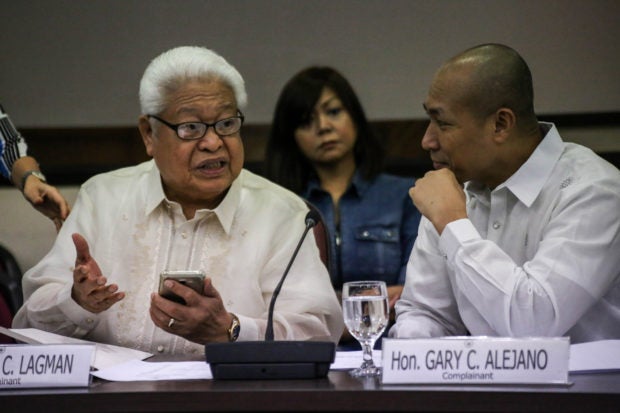 The attempt by opposition lawmakers to hold the “Gods of Padre Faura” liable for banishing one of their own has breezed through its first test.

Voting unanimously, the justice committee of the House of Representatives on Tuesday declared as sufficient in form the impeachment complaints filed by the members of the so-called “Magnificent 7” against seven Supreme Court justices who kicked out Maria Lourdes Sereno as Chief Justice.

The committee started its deliberations a day after Chief Justice Teresita Leonardo-De Castro told Malacañang and Congress that the high tribunal “should be left alone… without interference.”

Interestingly, De Castro had actively participated in the impeachment proceedings against Sereno, who was booted out on May 11 by her own colleagues through a quo warranto petition brought by Solicitor General Jose Calida.

“The Supreme Court should not be untouchable,” Albay Rep. Edcel Lagman told reporters after the House justice committee voted 21-0 to find the complaint sufficient in form.

“The decisions of the Supreme Court, once they are unjust, malicious or grossly unconstitutional, should not deter the other [branches] of government from making an issue out of these malevolent decisions,” he said.

Akbayan Rep. Tom Villarin expressed confidence that the impeachment complaints would also easily hurdle the next step of test for sufficiency in substance.

“The Gods of Padre Faura should be taken down from their pedestals and be made to account to the people for what they have done,” Villarin said.

Oriental Mindoro Rep. Salvador Leachon, House justice committee chair, reminded his colleagues about the gravity of their action, pointing out that their decision may lead to the expulsion of more than half of the high tribunal.

As lawmakers, he said they should “observe the highest standards of discernment in performing our mandate of initiating impeachment proceedings.”

Said Leachon: “The impeachment proceeding is a sacred process under the Constitution to ensure accountability of these highest officials of the judicial branch of government.”

“While the truth and justice are its primordial consideration, the welfare and stability of the major institutions should also be given equal consideration of significance,” he said.

Leachon refused to allow Villarin to join Lagman, Ifugao Rep. Teddy Baguilat and Magdalo Rep. Gary Alejano as complainants for his failure to affix his signature on the documents.

Upon the motion of Ako Bicol Rep. Alfredo Garbin, the committee also unanimously agreed to consolidate all the seven separate impeachment complaints.