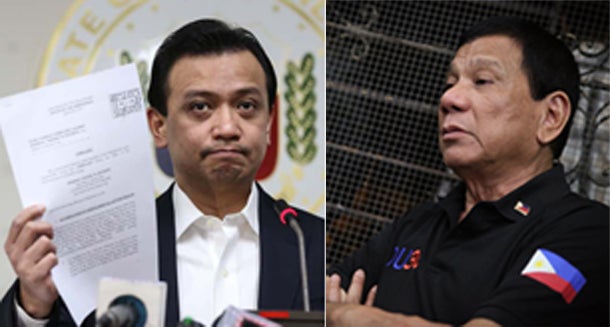 Duterte signed Proclamation 572 on August 31 to revoke the senator’s amnesty given by former president Benigno Aquino III in 2010.

In the proclamation, Duterte said Trillanes did not file an Official Amnesty Application Form  as per certification dated August 30, 2018, issued by Lt. Col. Thea Joan Andrade, stating “there is no copy of his application for amnesty in the records.”

The proclamation also stated that Trillanes “never expressed his guilt for the crimes that were committed on the occasion of the Oakwood Mutiny and the Manila Peninsula Siege.”

Despite Trillanes’ “failure to apply for amnesty and refusal to admit guilt, his name was nonetheless included among those granted amnesty” in 2010 and was approved by former defense secretary Voltaire Gazmin, the proclamation read.

“The grant of amnesty  to former LTSG Antonio Trillanes IV under Proclamation No. 75 is declared void ab initio because he did not comply with the minimum requirements to qualify under the amnesty proclamation,” Duterte said.

The President ordered the Department of Justice and the Court Marshall of the Armed Forces of the Philippines “to pursue all criminal and administrative charges” against Trillanes.

Duterte also ordered the military and the police “to employ all lawful means to apprehend” the coup leader “so that he can be recommitted to the detention facility where he had been incarcerated for him to stand trial for the crimes he is charged with.” /cbb