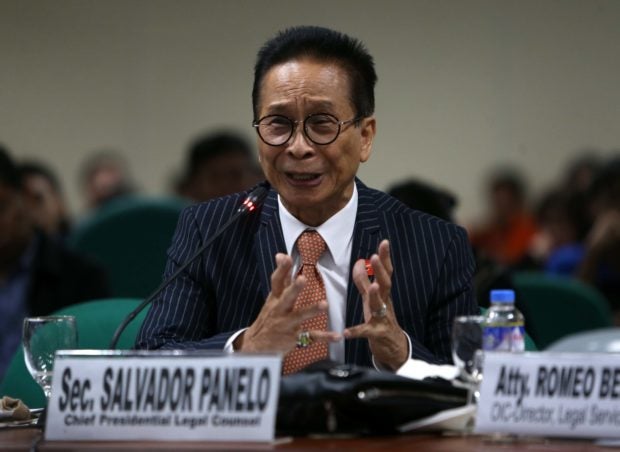 President Rodrigo Duterte’s critics “distorted” his latest remark that rape cases were higher in Davao City because his hometown had many beautiful women.

This was how Chief Presidential Legal Counsel Salvador Panelo on Monday played down the backlash against Mr. Duterte’s offhand comment, saying the President’s critics only made a big fuss over it.

In a statement, Panelo highlighted Mr. Duterte’s programs aimed at advancing and protecting the welfare of women, and the appointment of women to top government positions.

“The human rights critics and detractors are nitpicking again and making a fuzz about a statement [that] many beautiful women [are] being raped in Davao, making it a basis for accusing him of misogyny,” he said.

Panelo added: “They always distort the intended meaning of the President’s comment.”

He was referring to the Mr. Duterte’s remark in a speech in Mandaue City last week.

In rejecting allegations that Mr. Duterte was a misogynist, Panelo said the President was merely proud of the fact that there were many beautiful women in Davao City.

“[He] was merely priding himself of the fact that Davao, where he is from and mayor for 23 years, abounds with beautiful women, and at the same time advancing a theory that their being beautiful could be one motivating reason why the rapists sexually abuse them,” he said.

Mr. Duterte, he said, has high regard for women, particularly his late mother Soledad.

“The President reveres his late mother and, as Davao City mayor, had undertaken projects and measures protective of the rights of women and advancing their cause,” Panelo said.

He also cited the recent appointment of Teresita Leonardo-de Castro as Supreme Court Chief Justice as an example of Mr. Duterte’s “recognition to women of distinction.”