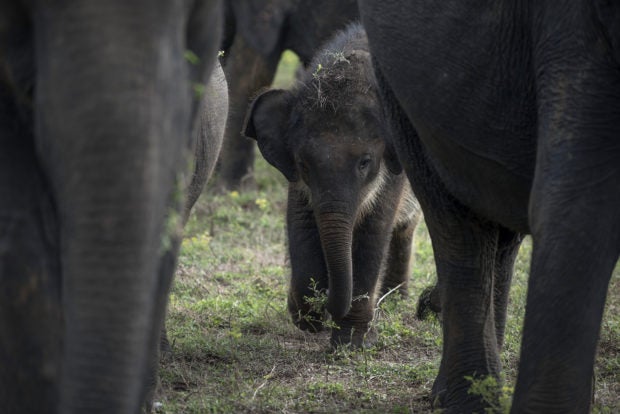 Colombo, Sri Lanka – Sri Lankan authorities on Monday began investigating the deaths of wild elephants in the east of the island after pulling seven carcasses out of a marsh, a minister said.

Wildlife Minister Palitha Thewarapperuma said six out of the seven animals found in the swamp were young – below the age of 12 – and he suspected that many more may have died there.

“We have wildlife experts and vets who are investigating the cause,” Thewarapperuma told AFP from the district of Polonnaruwa, 220 kilometres (135 miles) east of Colombo.

He said a possible reason was that the swamp is currently strewn with water hyacinth, an invasive plant known locally as Japan Jabara.

The swamp is located on a migratory route and the animals may have become bogged down and exhausted battling through the plants and then drowned.

Japan Jabara was introduced to Sri Lanka at the turn of the last century and has spread rapidly since World War II.

Allied forces stationed in Sri Lanka planted the free-floating species on waterways in a bid to mislead Japanese pilots on bombing missions into thinking that they were grassy fields suitable for landing in emergency.

“It is heartbreaking to see so many young elephants killed here. We are trying to see how we can flush out Japan Jabara and make this area safe again,” Thewarapperuma said.

Sri Lanka considers elephants a national treasure and they are protected by law.

However, human-elephant conflict near wildlife sanctuaries have led to the deaths of 375 people in the past five years, according to official figures.

Enraged villagers have retaliated by slaughtering nearly 1,200 of the beasts.

The Sri Lankan elephant population in the wild is estimated at 7,500. /kga