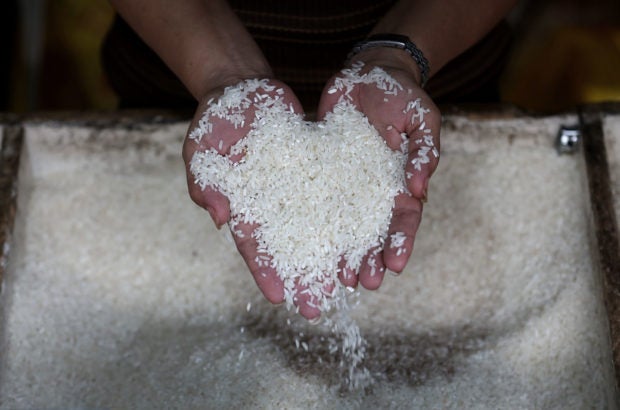 INFESTED RICE About 300,000 tons of imported rice are sitting at the ports in Subic Bay Freeport and Tabaco, Albay, as authorities try to quell a weevil (“bukbok”) infestation that Malacañang and lawmakers are demanding explanations for from the National Food Authority. —RICHARD A. REYES

JERUSALEM — The opposition and their “spin doctors” were making it appear that there is rice shortage in the Philippines, Malacañang said Monday, after President Rodrigo Duterte said the country has enough rice supply.

Duterte, in a speech before the Filipino community here, allayed fears of Filipinos over the reported rice shortage in the Philippines, saying more rice importation is coming.

“Now they’re saying that there’s a shortage of rice. But there’s plenty of rice, and it’s even coming here. Now there’s even an excess. You know, those are politics,” Duterte told overseas Filipino workers here.

The President did not expound his remarks that the rice shortage was just caused by politics.

Sought for clarification on the President’s statement, Presidential Spokesperson Harry Roque said it means the issue was just being created by the administration’s political rivals.

“They are making an issue where there’s none. There’s sufficient supply now and more coming but opposition and their spin doctors making it appear that there’s a shortage. There’s none,” Roque said in a text message to INQUIRER.net.

According to Roque, supplies “are sufficient and 125 thousand metric tons are also on their way.”

The National Food Authority (NFA) and Department of Agriculture came under fire following the spike of rice prices in the market.

Agriculture Secretary Manny Piñol, however, said the soaring prices of rice have been triggered by the government’s crackdown on rice smuggling.

To recall, the NFA was recently embroiled in controversy after sacks of rice in ships were found to contain “bukbok” or rice weevils.

But the NFA and Piñol claimed the infested sacks of rice were still safe for consumption even after fumigation.  /kga