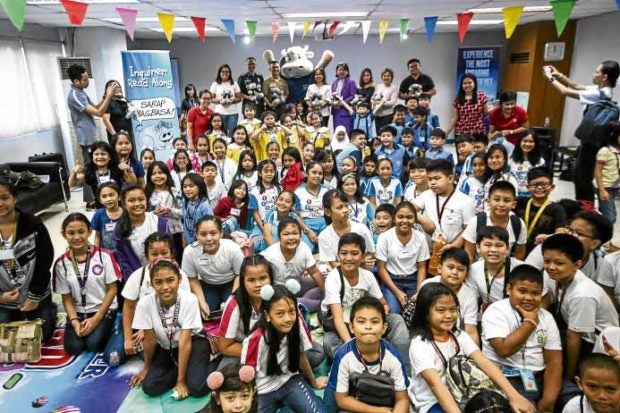 HEROIC STORIES FROM LIVING HEROES Students from different schools pose after listening to tales of heroism from Metrobank’s 2018 Outstanding Filipino awardees during the Inquirer Read- Along at the Inquirer headquarters in Makati City.—JAMSTA ROSA

Small heroic acts could lead to a greater cause.

This was the message of the the second session of Inquirer Read-Along belatedly commemorating National Heroes Day.

Over 100 children listened to tales of courage and greatness from guest readers during the Saturday morning program, dubbed #TapangAtGalingParaSaBayan at the Inquirer headquarters in Makati.

Justo read Luis Gatmaitan’s “Ang Ambisyosong Istetoskop,” a story about a stethoscope who aspires to be famous in the world through an excellent European doctor, but ended up being owned by a Filipino named Dr. Jose Rizal.

The story is about a small but smart tailor who wishes to do more with his life.

He then sets off to outwit strong and gigantic creatures to win the heart of a princess and becomes a symbol of courage and hope to the community.

“Every person should be willing to take a risk and go out of his or her comfort zone to see what is beyond the horizon. Just as what Pandakotyong did, he left his usual routine and did greater things, and it paid off,” said Facundo, who is a member of the Philippine Marines and the mobile training and exercise director of the Marine Corps Force Development Center.

For teacher Gragasin, heroism is about going beyond one’s limitations and doing things that would make an impact in the community.

“Humans are born imperfect and with limitations. So we should focus more on our abilities to become better persons for the people around us,” said Gragasin, who teaches physics at the Philippine Science High School-Cagayan Valley campus in Bayombong, Nueva Vizcaya province.

Being a hero does not always mean that a person has to sacrifice one’s life for a greater cause, Muñoz said.

“Heroism could be as simple as doing things beyond what is expected from a person. Strive to improve yourself all the time so you could give everything even if it means sacrificing your time for yourself and family,” said Muñoz, who is the directorate for logistics of the Philippine National Police.

But being sincere to one’s tasks adds substance and meaning to one’s goals and achievements, according to the Metrobank awardees.

Size does not matter

Precillas read “Si Carancal Laban sa Bongbongeros” by Rene Villanueva, which tells of how a pint-size boy led the townsfolk in driving away fishermen who were using dynamite and destroying marine life.

For Precillas, Carancal proves that size does not matter to be able to lend a helping hand.

“Just because you’re small does not mean you can be belittled by anyone. You can do something big for the benefit of others,” she said.

Stand up vs bullying

She said children could be heroes themselves by standing up against bullying.

“If they know someone who gets bullied, they could either convince the bully to repent or report the incident to elders to immediately address the problem,” she said.