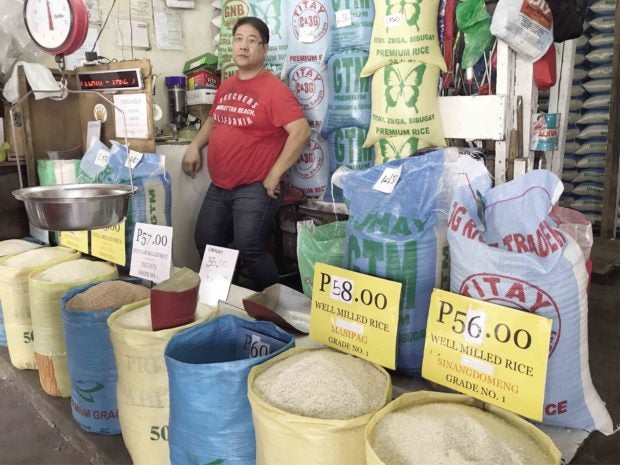 SHORT SUPPLY A rice stall owner stands next to a dwindling supply of the staple and price tags showing a continuing increase in costs. —JULIE ALIPALA

ZAMBOANGA CITY — Customs Commissioner Isidro Lapeña said he supported the idea of establishing rice trading posts in Sulu and Tawi-Tawi provinces but was opposed to the unbridled entry of imported rice without payment of duties.

Lapeña said rice trading centers could facilitate the buying and selling of rice and encourage businessmen to go through the legal process of bringing in rice.

“The rightful duties and taxes will be collected by the Bureau of Customs (BOC) for the government,” Lapeña said.

“This will eventually benefit the Filipino people,” he added.

Sulu and Tawi-Tawi were not known to produce grains but a large portion of the population is highly dependent on rice smuggled from Malaysia.

Lapeña said he never considered the proposal of allowing rice smuggling to keep supply sufficient, which had been attributed to Agriculture Secretary Emmanuel Piñol.

“I will go for the President’s approval of rice trading,” which was also a proposal by Piñol, Lapeña said.

The BOC chief was in the city to witness the turnover of 23,000 sacks of smuggled rice intercepted last week on Pilas Island in Basilan province.

The vessels were owned by Hadju Usman Sukarno of Tawi-Tawi and Hadja Nancy Arahadji of Zamboanga City.

Lapeña said the PCG showed its strong partnership with the BOC through the recent apprehension of the smuggled rice.

“This is something that we have been encouraging, cultivating between these two agencies,” Lapeña said.

He appealed to rice traders, who also import rice, “to pay rightful duties and taxes so that they don’t have to hide anymore.”

The commissioner also said his office was willing and ready to facilitate the entry of rice.

“What we want is to facilitate the inflow of critical commodity into the local market so that our people in Zamboanga will benefit from it,” he said.

But after the prescribed period, the rice would be forfeited in favor of the government, he said.

“We will immediately auction this off so that it will generate revenues for the government,” Lapeña said.

Martinez said the bureau had auctioned off a total of 67,000 bags of rice from January to June this year, generating at least P107 million in revenue for the government. —JULIE ALIPALA