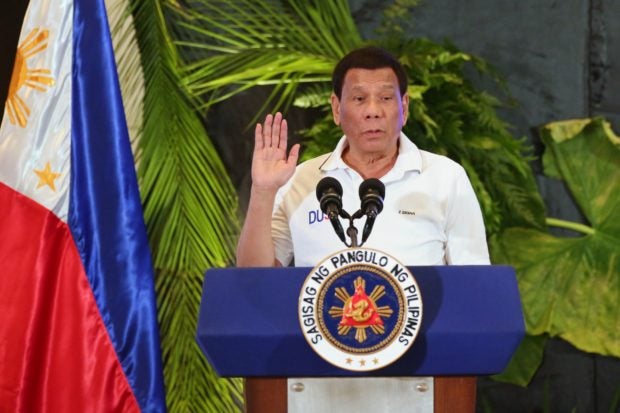 MANILA/JERUSALEM—When President Duterte makes the first visit to Israel by a Philippine President next week, officials on both sides will try to play down his record of jarring invective while promoting commercial and military ties.

Israel sees the four-day tour by Mr. Duterte and his top ministers as a chance to thank Manila for taking in Jews during the Holocaust and backing the Israeli independence campaign that followed.

Defense, labor and tourism deals are also on the agenda, cementing relationships between the Asian power and booming Israel, both historical US allies.

Yet Israel’s Government Press Office has said most of the visit will be closed to the media, an apparent precaution against faux pas by a President whose two-fisted crime-fighting tactics and rhetoric have raised hackles at home and abroad.

Some Israeli pundits have recoiled at his planned attendance at Holocaust commemorations.

Mr. Duterte is set to meet with Prime Minister Benjamin Netanyahu, visit the Yad Vashem Holocaust memorial and attend an event of the Filipino community in Israel during his four-day visit that begins on Sunday.

“We assign great importance to this visit, which symbolizes the strong, warm ties between our two peoples, as well as the enormous potential for developing and strengthening the relations. Cooperation between the two countries is thriving,” Israel’s foreign ministry said in a statement.

In 2016, in a bungled reference to an opponent’s remark that his rise could be like that of Adolf Hitler, Mr. Duterte said he himself would be “happy to slaughter” drug addicts on the scale of the Nazi leader’s Jewish genocide.

While Mr. Duterte apologized for that, he has been dogged by accusations from activists that thousands of killings in his ongoing war on drugs were executions, which he rejects, and is rebuked by women’s groups for remarks that make light of rape.

Mr. Duterte has lashed out repeatedly at the Catholic Church, deeming it hypocritical. His visit will include sightseeing in Jerusalem’s walled Old City, which houses major Christian, Jewish and Muslim shrines.

Aides say Mr. Duterte hopes to regulate labor relations with Israel, where between 24,000 and 28,000 Filipinos work, mostly as caregivers, and to promote Holy Land tourism from the predominantly Catholic Asian country, which has been growing by 30 percent to 50 percent annually in recent years.

Establishing a direct air connection between Israel and the Philippines is in discussion.

Mr. Duterte also wants to improve security cooperation with Israel, which has sold the Philippines three radar systems and upgraded 100 armored vehicles, and which Manila is now eyeing for an aircraft deal.

Mr. Duterte makes no secret of his personal disdain for Washington and its foreign policy. He has pivoted the Philippines away from its former colonial master, the United States, and toward warmer diplomatic and business ties with China and Russia.

Still, he shares Netanyahu’s rapport with US President Donald Trump. That has stirred modest hope in Israel that the maverick Asian leader might use his visit to announce recognition of Jerusalem as the country’s capital, as Trump did last December, outraging the Palestinians.

The United States and Canada have both had military hardware deals fall apart with the Philippines due to concerns over Mr. Duterte’s drug war. But so far sales with Israel have gone smoothly.

“[The visit] is for President Duterte to look for an alternative market for … weapons for our Armed Forces as well as for the police,” Henelito Sevilla, an international relations expert at the University of the Philippines, told Agence France-Presse (AFP).

Israel is among the world’s top arms dealers, with nearly 60 percent of its defense exports going to the Asia-Pacific region, according to Israeli defense ministry data.

Accompanied by an entourage including retiring military and police officials, Mr. Duterte is set to leave Manila at 1 p.m. on Sunday. From Israel, he heads to Jordan on Sept. 5, where he is expected to meet with King Abdullah II. —REPORTS FROM AFP AND AP