US help for PH in war on terror to continue 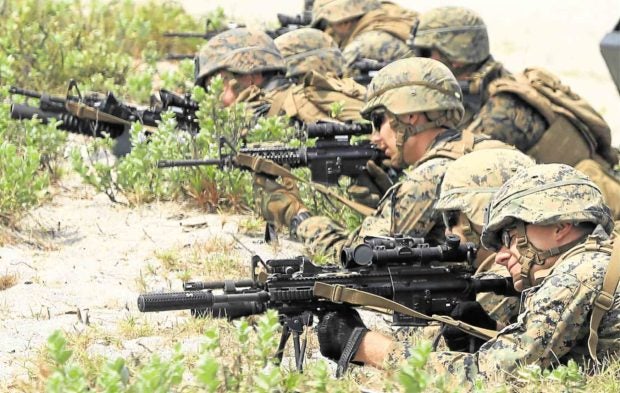 TRUSTED ALLY The US government’s continuing role in Philippine security could be gleaned from regular military exercises between American and Filipino soldiers, like this drill in Zambales province in May. —EDWIN BACASMAS

The United States will continue to support the Philippine military’s anti-terror operations, especially after the bombing in Isulan, Sultan Kudarat, that killed three people and hurt 37 others.

“At the request of the government of the Philippines, US special operations forces continue to assist the Armed Forces of the Philippines in Mindanao through support that increases intelligence, surveillance and reconnaissance capabilities,” said Molly Koscina, US Embassy spokesperson.

Koscina did not specify what support the Philippines could expect, but during the five-month siege of Marawi last year, Filipino troops apparently received drone and satellite intelligence from the United States.

The military tagged two groups of the Bangsamoro Islamic Freedom Fighters (BIFF) as being behind the deadly attack that killed three people and wounded dozens of others in Isulan on Tuesday night.

Brig. Gen. Cirilito Sobejana, commander of the 6th Infantry Division, said one of the groups was led by a certain Ismael, alias Bungos, who operated in the Maguindanao area.

“We’re trying our best to capture them to give justice to the victims,” Sobejana added.

The Special Investigation Task Group Hamungaya released a sketch of the Isulan bomber in Cotabato City.

Rasco described the suspect as being 20-25 years old, about 5’6” tall, of medium build and weighing about 60 kilograms, and of fair complexion.

The blast came while Isulan was on the second day of celebrating its foundation day and its Hamungaya Festival.

Supt. Aldrin Gonzales, Cotabato regional police spokesperson, noted another computer-generated sketch of the suspect circulated on social media the day after the bombing, but that was a fake.

“That was done by somebody who wanted to muddle the investigation,” Gonzales told the Inquirer.