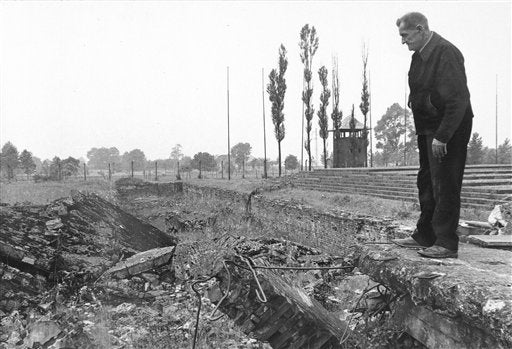 In this undated file photo from 1979, a former inmate of the Nazi concentration camp at Auschwitz-Birkenau, Poland sometime in 1979, gazes down at ruins of gas chambers where hundreds of people were exterminated during World War II. The oldest known survivor of the Auschwitz concentration camp, a teacher who gave lessons in defiance of his native Poland’s Nazi occupiers has died at the age of 108, an official said Monday, Oct. 22, 2012. Antoni Dobrowolski died Sunday in the northwestern Polish town of Debno, according to Jaroslaw Mensfelt, a spokesman at the Auschwitz-Birkenau state museum. (AP Photo/Horst Faas, File)

WARSAW, Poland — A parliamentary commission in Poland reported Friday that the country lost more than 5 million citizens and over $54 billion dollars (46.6 billion euros) worth of assets under its Nazi German occupation during World War II.

The commission announced the numbers as part of the current Polish government’s declared intent to seek damages from Germany. It said the figures were preliminary estimates.

The leader of the ruling Law and Justice party, Jaroslaw Kaczynski, argued that as the first country the Nazis attacked in 1939, Poland also was the first to put up resistance and suffered the greatest losses.

Observers said the talk of pursuing damages from Germany is addressed largely to elderly Polish voters. Poland has not made an official appeal, and Foreign Minister Jacek Czaputowicz said earlier this year that the issue was not weighing on Warsaw’s good neighborly relations with Berlin.

Poland spent decades under Soviet domination after the war and wasn’t able to seek damages independently. However, Germany has made payments to Polish survivors of Nazi atrocities.

The preliminary calculations done for the commission by university experts put the number of Polish citizens killed from 1939 to 1945 at 5.1 million, including 90 percent of the Jewish population that numbered about 3.5 million before the war.

Losses in cities were estimated to be worth 53 billion zlotys ($14 billion; 12 billion euros,) with Warsaw alone accounting for more than two-thirds of the total cost. Additional losses in agriculture and transportation infrastructure were also factored in.

The full report is expected to be published next year, commission head Arkadiusz Mularczyk said.  /kga

Read Next
Lacson on Duterte rape remark: ‘It’s tiring to comment on jokes’
EDITORS' PICK
Esperon: ‘The master red-tagger is no other than Jose Maria Sison’
Ang init! Dagupan sizzles at 52 degrees Celsius
Get a chance to win 5G smartphones with Smart Signature Plans
Marian Rivera partners with JC to boost public health awareness
Mocking PH protests, China keeps 287 vessels in West Philippine Sea
Tired of your Wi-Fi signal problems at home? Here’s a solution!
MOST READ
Sharon Cuneta flies to LA to take some time off: ‘I need to breathe, collect myself’
Mocking PH protests, China keeps 287 vessels in West Philippine Sea
Trillanes to run for president in 2022 elections
Locsin tells Roque: Drop the subject, leave foreign affairs to me
Don't miss out on the latest news and information.