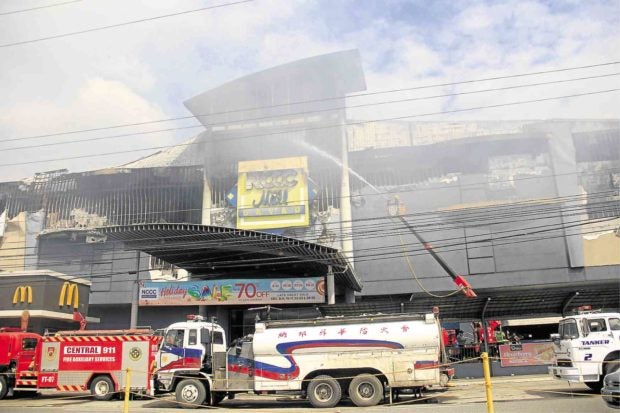 DAVAO TRAGEDY Fire trucks are parked outside NCCC Mall in Davao City on Dec. 23 at the height of the tragic fire. —BARRY OHAYLAN

Daus said families of the victims were informed about the filing of the case. 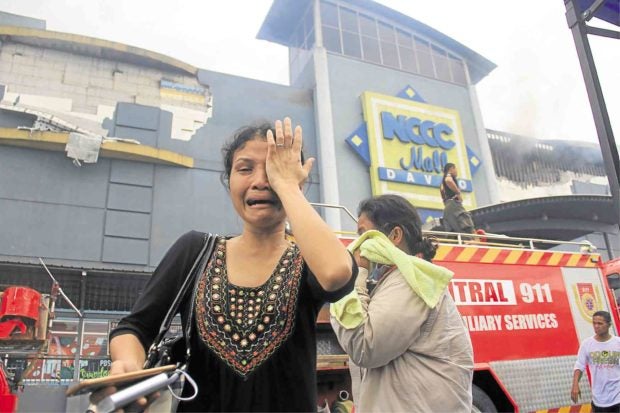 GRIEF STRICKEN Grief is etched on the face of this woman who had just been informed that a loved one was among those killed in the NCCC Mall fire on Dec. 23 last year. —BARRY OHAYLAN

Figurasin said the cases were based on the task force’s “exhaustive, scientific investigation into the cause, origin and responsibility” of the Dec. 23 blaze that razed the four-story mall in downtown Davao.

“Their liability stemmed from what they did and did not do,” the task force leader said.

Figurasin said based on probers’ findings, the sprinkler systems of the mall’s third floor, and some on the fourth level—where SSI was located—were not working when the fire broke out.

“Had the sprinkler system been working, the effects of the blaze could have been mitigated,” he said.

The fire alarm system was also defective such that when the first sparks of the blaze happened on the third floor, the alarm did not ring on the upper floor, Figurasin added.

Daus cited city prosecutor Nestor Ledesma as saying that a team of up to three state lawyers would be assembled to conduct the preliminary investigation that could take up to three months.

To ensure an airtight case, officials said it took eight months before authorities could complete the investigation that led to Thursday’s filing of charges.

The failure of the Department of Justice to act immediately on the task force’s findings and recommendations, following the change of leadership in the department, also contributed to the apparent delay.

Daus said the city prosecutor vowed to resolve the cases before the disaster’s first anniversary.

At least 37 SSI employees and one mall worker died in the 32-hour inferno.

Read Next
Tugade should be kicked out
EDITORS' PICK
Pru Life UK receives four golden arrows for solid corporate governance
Speed up your game with the new vivo Y20s [G]
PH’s COVID-19 active cases reach over 190k after 12k new infections reported
Harry Roque in hospital for COVID-19 treatment
Pre-order the new vivo Y20s [G] to get a free TWS earphone
WHO says not to use ivermectin on COVID-19 patients
MOST READ
Stop ‘creeping occupation’ of ‘militia’ boats in WPS, Pacquiao asks China
Bea Alonzo clarifies status of her relationship with Dominic Roque
Convicted former aide of Sen. Bong Revilla dies — BuCor
Locsin to China: ‘Then move out’
Don't miss out on the latest news and information.