Corona pressured to inhibit self from Arroyo cases | Inquirer News

Corona pressured to inhibit self from Arroyo cases 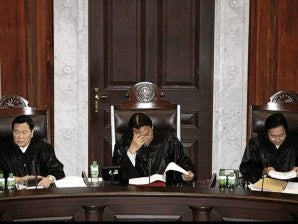 HIGH ROAD Supreme Court magistrates, led by Chief Justice Renato C. Corona, read documents at the start of oral arguments on the constitutionality of the joint panel of the Department of Justice and Commission on Elections to investigate former President Gloria Macapagal-Arroyo on vote-fixing charges during the 2007 elections. Flanking Corona during deliberations in Manila on Tuesday are Associate Justices Antonio T. Carpio (left) and Presbitero J. Velasco Jr. NIÑO JESUS ORBETA

A group formed to ensure that Gloria Macapagal-Arroyo will be made accountable for her purported crimes sought Tuesday the inhibition of Chief Justice Renato Corona from taking part in deliberations on cases involving the former President and now representative of Pampanga.

The Bantay Gloria Network (BGN), led by former Akbayan Representative Risa Hontiveros, Leah Navarro of the Black and White Movement, NBN-ZTE whistle-blower Jun Lozada, and University of the Philippines student Juan Carlos Tejano, filed two motions in the Supreme Court—one claiming its right to intervene in the suits being heard by the tribunal, and the other calling on Corona to inhibit himself.

Hontiveros, Navarro and Tejano filed the motions at about 2 p.m., as the high court began to deliberate on petitions assailing the constitutionality of the joint panel of the Department of Justice and Commission on Elections (DOJ-Comelec) that looked into purported election fraud during the preceding administration and recommended the filing of electoral sabotage charges against Arroyo.

Hontiveros cited conflict of interest on the part of Corona, pointing out that he had served as a confidential officer of Arroyo from the time she was Vice President. She said that should the Chief Justice inhibit himself, the high court could regain public trust in its impartiality.

She further said the BGN was asking Corona to inhibit himself because he was the “main symbol” of the high court.

The action of Tejano, the president of the UP College of Social Science and Philosophy Student Council, indicated that the Filipino youth was not indifferent to the burning issue.

“We grew up with GMA (Arroyo). We grew up viewing politics as chaotic and dirty. For us [youth], it is a very important issue,” he told the Philippine Daily Inquirer.

“We are tired of this brand of politics. We cannot accept the fact that GMA still has vestiges of power even if she is no longer the president,” he said.

Asked to comment, the Supreme Court administrator and spokesperson, Jose Midas Marquez, said Corona was aware that some people had been seeking his inhibition vis à vis cases concerning the former President and her husband, Jose Miguel “Mike” Arroyo.

“Since it’s [already in the media], let’s just assume he’s aware of that. But he has not said anything about it,” Marquez said, adding that since Corona had yet to inhibit himself, it meant that he “has decided to stay.”

“If he thinks he should inhibit, he would inhibit. So let’s just wait,” Marquez said.

Marquez also said that while some people were seeking Corona’s inhibition, others, such as Senator Miriam Defensor-Santiago and Comelec Chairman Sixto Brillantes, had advised him to stay on.

“Let’s satisfy ourselves with the pros and cons since various individuals are saying otherwise. If the magistrate thinks he cannot decide the case impartially, he can always inhibit,” Marquez said.

In the five-page motion for leave to intervene, the petitioners said that as citizens, they had “a direct and substantial interest in the outcome” of the consolidated cases—Mike Arroyo vs the DOJ, Benjamin Abalos Sr. vs Justice Secretary Leila de Lima, and Arroyo vs the Comelec, which seek a declaration by the Supreme Court en banc of the unconstitutionality of the DOJ-Comelec panel.

“To be sure, the issues involved in these consolidated petitions will have far-reaching implications and are of transcendental importance considering that they involve a determination of the validity of the investigation and prosecution of an election offense, a crime which definitely goes against the very fabric of our democratic institution,” the motion read.

In the seven-page motion for inhibition against Corona, the petitioners pointed out that “the honorable court  has held that a judge or magistrate should not handle a case in which he might be perceived, rightly or wrongly, to be susceptible to bias and partiality, which axiom is intended to preserve and promote public confidence in the integrity [of] and respect for the judiciary.”

They said that before Corona was appointed Supreme Court associate justice, he had had “a very close personal and professional relationship” with Arroyo since 1998, when she was still vice president and he was her chief of staff.

Arroyo also named Corona as her chief of staff when she assumed the presidency in January 2001. He was subsequently appointed presidential legal counsel and then acting executive secretary.

“Due to this close personal and professional relationship and presumably … GMA’s utmost confidence in him,” the petitioners said, Corona was named associate justice of the high court on April 9, 2002.

They said that “barely a month prior to the end of her term, and with much opposition from the different sectors of society,” Arroyo appointed him Chief Justice.

The petitioners said Corona’s assignment to confidential positions showed that he was very much in Arroyo’s good favor.

They pointed out that during the November 24 oral arguments before the high court on the consolidated cases, Corona made statements purportedly creating an appearance of partiality for Arroyo.

“Justice dictates that the honorable court or any member thereof should not be perceived as biased, partial or beholden to … GMA. The parties and, more importantly, the Filipino people deserve no less than a fair, impartial consideration of arguments presented and issues involved,” the petitioners said.

They called on Corona to exercise sound discretion and carry out his sworn duty to uphold fair and impartial administration of justice by inhibiting.

In a statement, Senator Franklin Drilon described Corona’s “judicial record” as “untarnished by a negative vote against the ex-President,” and reiterated his appeal for the Chief Justice to inhibit himself from deliberations on the cases involving Arroyo.

Drilon said Corona’s 19-0 score concerning the Arroyo cases had  “created doubts in the public’s mind about his impartiality.”

The senator listed the 19 cases in the Supreme Court in which Corona voted in favor of Arroyo. Among them are:

Concurred in the Oct. 10, 2010, decision stopping the Aquino administration from revoking the appointment of Arroyo’s alleged midnight appointees.

Concurred in the April 7, 2010, ruling denying the petition of then Senator Aquino and upholding Republic Act No. 9716 creating the first and second districts of Camarines Sur.

Concurred in the decision reversing its previous decision ordering the Sandiganbayan to proceed with the trial of former Leyte Gov. Benjamin “Kokoy” Romualdez, whose son is a known Arroyo ally.

Concurred in the Feb. 11, 2009, decision upholding the validity of the PH-US Visiting Forces Agreement and ordering the transfer of US serviceman and rape convict Daniel Smith to a Philippine detention facility.

Dissented in the Oct. 14, 2008, decision declaring the Memorandum of Agreement on Ancestral Domain entered into by Arroyo’s peace negotiators with the Moro Islamic Liberation Front as “contrary to law and the Constitution.”

Concurred in the July 16, 2008, decision declaring that communications in the PH-Japan Economic Partnership Agreement signed by Arroyo and then Japanese Prime Minister Junichiro Koizumi on Sept. 9, 2006, were covered by executive privilege and not subject to public disclosure.

Concurred with the March 25, 2009, decision stating that then Social Security System Chair Romulo Neri was not liable for contempt for not appearing in the Senate hearings on the NBN-ZTE deal because his testimony was covered by executive privilege.

Dissented in the Feb. 15, 2008, decision declaring that the tapped conversations between Arroyo and Election Commissioner Virgilio Garcillano was not prohibited from broadcast.

Dissented in the May 3, 2006, decision declaring Arroyo’s Presidential Proclamation No. 1017, which put the country under a state of national emergency in March 2006, as “partly constitutional, partly unconstitutional.” With a report from Marlon Ramos