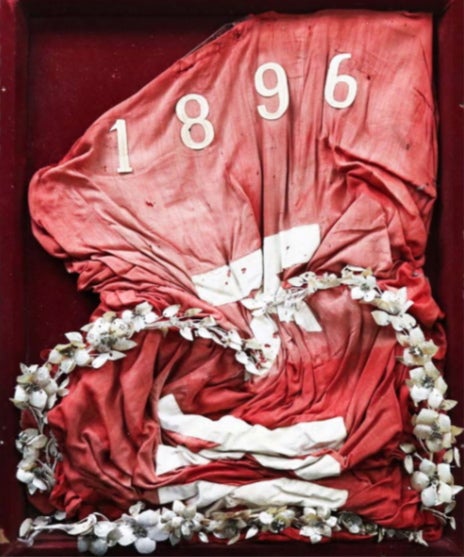 FOR SALE This cotton flag in the catalog of Leon Gallery’s
Magnificent SeptemberAuction is titled “Exceedingly Rare and
Exceedingly Important Personal Flag of Andres Bonifacio.”

The “personal flag” of Katipunan founder and revolutionary Andres Bonifacio, sewn by his wife, Gregoria de Jesus, will be auctioned off by Leon Gallery on September 8.

Bidding will start at P1 million.

The provenance of the flag is unassailable, according to Jaime Ponce de Leon of Leon Gallery.

It was gifted by Bonifacio’s widow herself to Antonio Santos Bautista of Malolos, Bulacan province, on the occasion of the 33rd anniversary of the Malolos Congress in 1931.

The flag has since been passed on to Bautista’s descendant Dez Bautista, a scholar and heritage conservationist.

Bonifacio founded the Katipunan secret society that led the revolution against Spain.

He was called “Supremo” or “supreme leader.”

The flag is Lot 91 in the catalog of Leon’s Magnificent September Auction. It is titled “Exceedingly Rare and Exceedingly Important Personal Flag of Andres Bonifacio.”

According to Leon, the flag is made of “cotton cloth,” with “the letters ‘KKK’ emblazoned.”

The initials, “in white on a field of red,” stand for the full name of the Katipunan—“Kataas-taasan, Kagalang-galangan, Katipunan ng mga Anak ng Bayan” (Highest, Most Noble League of the Sons of the Nation).

Antonio Santos Bautista was head of the Malolos fiesta organizing committee in 1931 when he invited Bonifacio’s widow to unveil the monument to the Malolos Congress of 1898 on the patio of the Barasoain Church (merely a “visita”—“vice church” or chapel—of the Malolos Church, now Cathedral, at that time).

The wealthy Bautista, a former Katipunan revolutionary himself, gave the money for the erection of the monument.

Bautista and Gregoria de Jesus were related. He was the nephew of Don Ariston Bautista Lin, who was married to Doña Petrona Nakpil, the sister of Julio Nakpil.

De Jesus had married Julio  Nakpil, the composer and also Katipunan revolutionary, after she was widowed when Bonifacio was killed by Emilio Aguinaldo’s men in 1897 in one of the most controversial episodes in Philippine history.

According to historians, De Jesus had suffered ignominy for being Bonifacio’s widow and had been harassed by Aguinaldo and his supporters.

So when she was invited by Bautista to unveil the Malolos Congress monument, she was overjoyed.

According to the auction catalog, “Gregoria was so moved at the invitation recognizing her status as Lakambini of the Katipunan (Muse of the Katipunan) that she brought Bonifacio’s personal flag as a gift to Don Antonio.”

The monument was revealed after De Jesus lifted three flags, according to the catalog: “… the first was Bonifacio’s traditional colors and with KKK emblazoned on it; the second, with a red K on a field of blue; and finally, a third flag of the present design.”

The first flag appeared to have been the personal flag of the Supremo himself.

“The flag had hung in Bonifacio’s study and then had been hidden among Bonifacio’s papers in his escritorio (or writing desk) in Tondo,” the catalog says. “It was the first Katipunan flag to be made; and was, in fact, designed and sewn by Gregoria de Jesus herself at the Supremo’s request.”

Bonifacio’s flag has been encased by Dez Bautista in a carved box filled with silver-colored fabric flowers. The year 1896 has been added to the tableau.

Also to be auctioned off is the Katipunan Decalogue or 10 Commandments said to be written by Bonifacio himself, with his only extant photograph, showing him on his wedding day.

Historic Katipunan membership documents and epaulets and other insignia as well as the Katipunan council of officers ceremonial medal will also be bid.

The Katipunan relics and documents came from the collection of the late historian and scholar Epifanio de los Santos, after whom today’s Edsa is named.