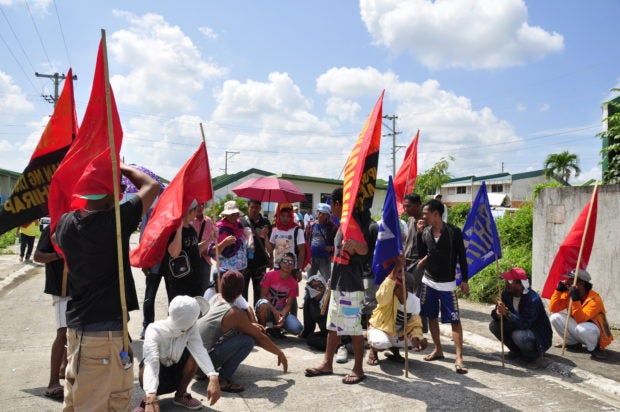 The homeless were accompanied by red-flag bearing militants. Photo by Andy Alvarez

BACOLOD CITY – About 1,500 homeless Bacolod residents on Thursday began a campout at a housing project, in Barangay Felisa to demand that they be awarded the unoccupied houses in the area.

The homeless families, along with their children and their belongings, occupied sidewalks in front of the houses at the site of the Armed Forces of the Philippines (AFP)/Philippine National Police Personnel (PNP) National Housing Authority (NHA) Project.

They said they would not leave until they got a satisfactory reply from authorities.

Long-unoccupied housing units  should be awarded to the homeless, according to Berlita Ante, Kadamay Negros secretary general.

She cited Joint Resolution No. 2 of Congress authorizing the NHA to award to other qualified beneficiaries housing units not yet occupied by the awardees from the AFP, PNP, Bureau of Fire Protection, and Bureau of Jail Management and Penology. 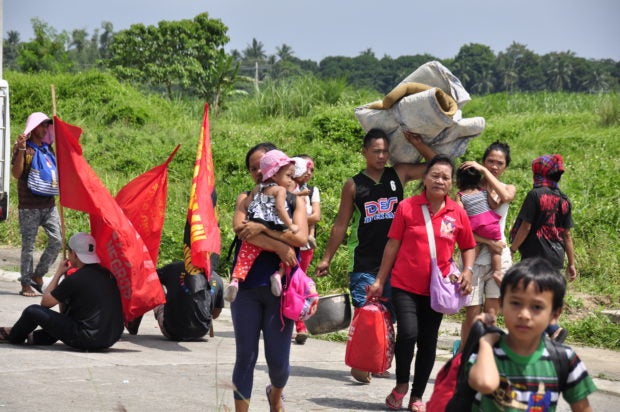 She said the President has said that unoccupied houses should be awarded to qualified beneficiaries, but the NHA has given them the runaround.

There are so many homeless people and there are houses built by the NHA in Felisa that have not been occupied for a long time, she said.

Bacolod NHA Project Manager Alejandro Ongsuco said they have been addressing the request of Kadamay.

The PNP, he said, had agreed to a dialog with Kadamay on September 7 but they were still waiting for a reply from the AFP.

National representatives of the AFP and PNP housing were needed for the dialog, Ongsuco said, adding that they would get in touch with them to see if a dialog could be fast-tracked.

Ante said the homeless people would not enter the houses until the dialog took place, but would not leave the area to ensure that the dialog pushed through.

All of the 1,498 houses have been awarded to the beneficiaries, and eight have so far been occupied, he said.

One of the reasons for the delay in the occupancy of the 22-square meter houses was that the beneficiaries had complained that the units were small. The Duterte administration agreed that two units would be awarded per beneficiary to make it 44 square meters, he said.

Bureau of Fire personnel who were already awarded agreed to accept one unit each or there would not be enough for their colleagues, he added.

The houses, which have individual titles, have yet to be connected to the Central Negros Electric Cooperative, Ongsuco said.

A recipient is required to pay P200 a month for 25 years for a housing unit, he added.

Among the homeless camped out at Felisa was Bebeth Dahildahil and her husband Ruben, a pedicab driver, of Barangay Taculing, and her 4-day-old baby Mera.

She said they have five children and could not afford a decent house so they were hoping the government would award them one of the houses at Felisa.

“We want to avail of a house here because Barangay 40 where we live is flood-prone and has been hit by fire many times,” Flordelisa Robillo, 53, said.

Read Next
UP head ‘deeply regrets’ pain caused by presence at Imee’s KB reunion
EDITORS' PICK
A delightful blessing!
Gov’t plans to open COVID-19 vaccination for 5- to 11-yr-olds by January 2022
Gov’t eyeing COVID-19 vaccine booster for essential workers, indigents by Dec. 10
Villar Group gears up for AllValue Shopping Party on Dec. 3; around P 1-million promos and discounts up for grabs
Omicron variant detected in more countries as scientists race to find answers
Legarda: Ending Violence Against Women, a cause for all
MOST READ
Quiboloy warns of ‘much worse than Omicron virus’ if his ‘persecution’ is not stopped
Marcoleta defends pol ads on ABS-CBN
MMDA: Number coding during afternoon rush hours back this week
PH updates ‘red list,’ travel ban imposed on 7 more countries
Don't miss out on the latest news and information.