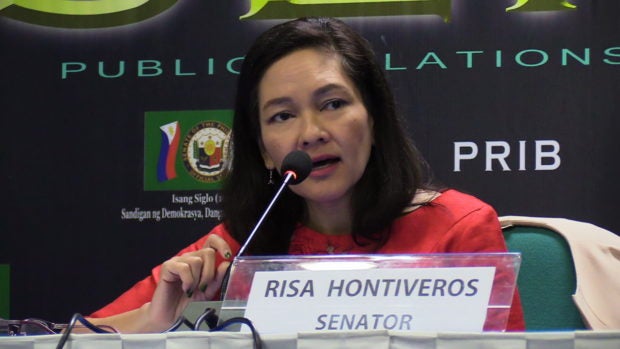 This is a wakeup call for the Senate to pass with urgency the SOGIE Equality Bill. We cannot afford to delay this measure any longer.

Senator Risa Hontiveros issued this statement on Wednesday over the reported case of discrimination suffered by popular impersonator Jervi Li, better known as KaladKaren Davila, when she and her friends were denied entry into a Makati City bar due to their sexual orientation.

“Unless we have a law that secures the basic rights and welfare of all LGBTs (Lesbian Gay Bisexual Transgender), the discrimination that happened in Makati will happen again. LGBT persons are easy targets of harassment and violence,” the senator stressed.

Hontiveros, author of the Sexual Orientation and Gender Identity and Expression (SOGIE) bill, said the measure “is a response to the daily experience of discrimination that lesbian, gay, bisexual, transgender, and queer persons face in bars, schools, and workplaces.”

The bill seeks to penalize discrimination based on sexual orientation, gender identity and expression or SOGIE. A counterpart measure was approved by the House of Representatives last year.

Currently, the measure has been in the Senate’s period of interpellations for 623 days since it was sponsored on the floor.

“I hope KaladKaren’s awful experience serves as a signal to my colleagues in the Senate to finally end the debate on the measure and move for its immediate passage,” Hontiveros said.

On Sunday night, Kaladkaren posted a video of the said incident on social media which drew netizens’ ire against the local Makati bar that refused entry to her group.

Hontiveros emphasized that “any further delay on the bill means … life and death to the members of the LGBT community who are subjected to daily harassment, discrimination, and abuse.” /cbb