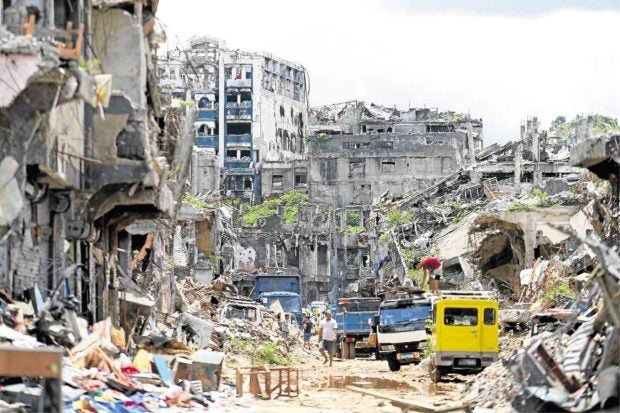 MARAWI DESTRUCTION In this photo taken in May, Marawi residents are allowed to return to their communities and inspect their homes destroyed by the fighting between government troops and gunmen who laid siege to the city. —JEOFFREY MAITEM

MARAWI CITY—Norodin Lucman, a Muslim leader who lived in one of the villages here flattened by the five-month war between government troops and gunmen loyal to the Islamic State last year, is getting impatient.

Lucman believes residents can start again “and pick up the pieces of our lives, clean up our property and perhaps rebuild” if they will finally be allowed to return to their homes.

“What is happening now is that the more this rehabilitation is being delayed, the more corruption will take place,” said Lucman, one of the 70 residents who were trapped at their homes in Barangay Moncado Kadingilan at the start of the military operation in late May last year.

Zia Adiong, an assemblyman of the Autonomous Region in Muslim Mindanao (ARMM), is also tired of waiting.

“If I am feeling impatient because I want to have a comfortable home now, I can’t imagine how impatient my relatives are who have been staying in evacuation tents,” he said earlier.

Task Force Bangon Marawi (TFBM) said it would have to establish the owners of lots and buildings in a 250-hectare area, where fighting occurred before the actual ground rehabilitation starts at the end of September.

“As of now, we do not know exactly who owns the lots and the buildings. That is the very reason we are organizing a second Kambisita on Sept. 10,” Housing Secretary Eduardo del Rosario, TFBM chair, told reporters here on Aug. 24.

Kambisita is coined from “kambalingan,” a Maranao term for “to return,” and “bisita” (visit). It is a program where Marawi residents are allowed to inspect their properties, escorted by soldiers, local government employees and TFBM members. 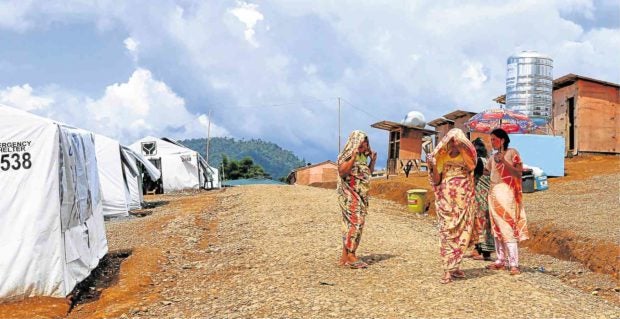 TEMPORARY HOMES Families displaced by the Marawi conflict stay in temporary shelters, like tents, as they await the rebuilding of the city. —JEOFFREY MAITEM

The first Kambisita was held in April when 10,835 families (77,700 people) were allowed to visit their houses for three days, from 6 a.m. to 3 p.m., to salvage their properties and to mark the boundaries of their homes.

Some families were unable to identify the boundaries. To prepare for the second Kambisita, the residents would undergo seminars and workshops that would help them in establishing the exact boundaries of their lots as well as determining the damages.

Col. Romeo Brawner Jr., deputy commander of the Joint Task Force Ranao, said they were measuring the lots using a drone to draw up the GPS coordinates of each house.

The data would be cross-checked against information collected by social workers from each family.

Brawner said 18 teams would also be organized and trained to help draw up a land survey.

Read Next
Dengue kills 3 in Romblon
EDITORS' PICK
Cebu City closes its borders
Style and music journeys with Claudia Barretto
BREAKING: 1,075 people in PH has coronavirus disease – DOH
IATF: Food firms to operate with 50% of workforce during Luzon quarantine
DILG to stranded workers: ‘Stay where you are’ until Luzon-wide quarantine is over
UP-PGH wards for COVID-19 patients finished in 5 days
MOST READ
Pacquiao to seek probe on leaked private letter from Barangay Dasmariñas
Tootsy Angara bares neighbor wanted them out of village
All 3 COVID-19 positive patients in Bicol sent home
BREAKING: 1,075 people in PH have coronavirus disease – DOH
Don't miss out on the latest news and information.