Roadwork won’t stop but bridge to be restored 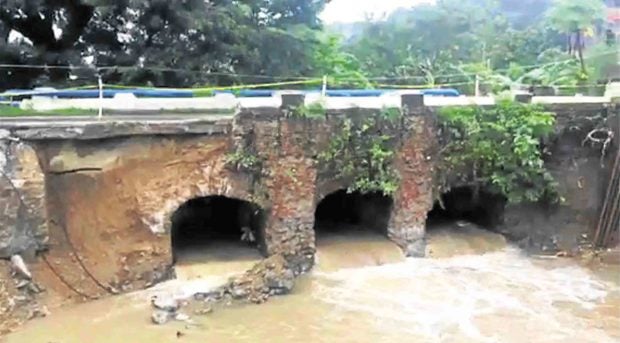 BRIDGE DAMAGE The Department of Public Works and Highways has vowed to protect the Spanish-era Barit Bridge in Laoag City from further damage. —LEILANIE ADRIANO

LAOAG CITY—Old red bricks from Barit Bridge (also called Puente de Barit), which peeled off due to a road widening project, have been ordered saved after the Department of Public Works and Highways (DPWH) promised to restore the Spanish-era structure.

Nestor Pasion, district engineer,  announced this during a committee hearing on Thursday of the Ilocos Norte Provincial Board, which looked into the government project that damaged a vital Ilocos Norte cultural property. The bridge was said to have been constructed before 1888.

As of Friday, a road crew built a retaining wall at the northern approach of the bridge to strengthen its “wing wall,” as monsoon rains pounded the city.

Pasion attributed the damage to a backhoe that was widening the approach to the bridge early in August and said it was “unintentional.”

Earlier classified as a weak bridge, Puente de Barit may require an injection of concrete epoxy, he added.

But Pasion also admitted ordering the road project to proceed despite a campaign to preserve the old bridge.

In a letter in April, Dr. Rene Escalante, chair of the National Historical Commission of the Philippines (NHCP), requested the DPWH to preserve Barit Bridge and urged the agency to suspend the roadwork until the NHCP saw and approved development plans.

Pasion said he had thought a DPWH engineer had already sent the road plan to the NHCP “so I issued the notice to proceed.”

“We are liable, I think, but please give us consideration,” he said at the hearing of three committees of the provincial board.

The proceedings were attended by DPWH representatives, local heritage advocates and resident Glenn Jose, who, on Aug. 10, posted on his Facebook page a picture of the old bridge being demolished.

Board Member Vicentito Lazo, who lives in Laoag, said the DPWH plans did not require the demolition of Barit Bridge.

He said this would be made a basis for the filing of charges “against erring individuals” and to “make sure no government money shall be used in repairing the bridge.”

To avoid a repeat of the Barit Bridge fiasco, the provincial board also said it would issue a resolution directing the province’s 21 towns and two cities to submit a list of important cultural properties to be endorsed to the Philippine Inventory of Cultural Properties and Historic Events, also known as Philippine Heritage Map (PHM).

Bernard Joseph Guerrero, consultant of PHM, said previous damage on old bridges, like the damage caused by a wayward truck on Paoay Bridge two years ago, had gone unnoticed.

“The question as to whether these structures need to be declared historical and cultural properties or not is a nonissue to begin with,” said Guerrero, a resident of Paoay.