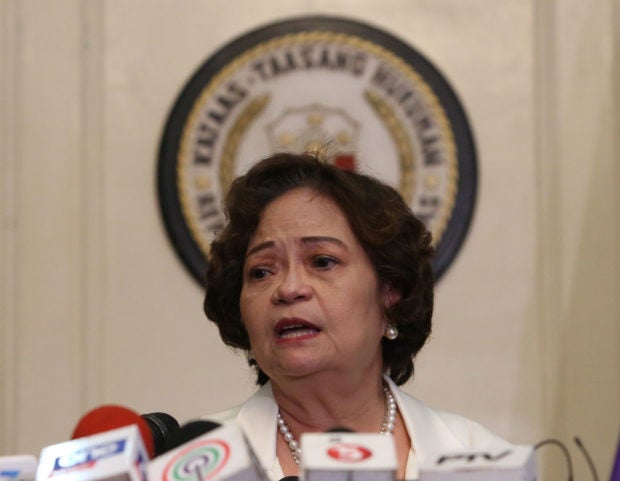 When newly appointed Chief Justice Teresita de Castro retires in 40 days, she wants her court to be remembered as the one that “restored collegiality” in the controversial and highly politicized judiciary.

“I want the De Castro court to be remembered as the court that restored collegiality in the Supreme Court,” she said hours after taking her oath as the replacement for ousted Chief Justice Maria Lourdes Sereno, whom De Castro had repeatedly accused of violating collegiality in the highest court of the land.

De Castro, who had not hidden her distaste for Sereno, was all smiles when she arrived at the Supreme Court building on Padre Faura street past 8 a.m. on Tuesday.

Employees clapped as De Castro alighted from a white van. They kissed and embraced her before handing De Castro a bouquet of flowers.

Outside the gate, less than 20 protesters held a picket against her appointment.

“She has no delicadeza,” said protester Jimmy Calanog.

“If she has a sense of propriety, she wouldn’t even accept this post,” the protester said.

“But because she has no delicadeza, she is now Chief Justice,” he said.

“This is her reward,” he added.

At a press conference, De Castro shrugged off detractors and asked them to “move on.”

In November, De Castro testified at the House of Representatives as a witness to impeach Sereno.

After playing a prominent role in the aborted impeachment process, De Castro voted in favor of ousting Sereno through means not mentioned in the Constitution—a quo warranto petition filed by President Duterte’s solicitor general.

“I won’t have any problem maintaining the independence of the judiciary,” said De Castro.

She said Mr. Duterte appointed her “without knowing me personally so I don’t think the President will do anything to impair the independence of the judiciary.”

De Castro would meet the President on Friday for her ceremonial oath-taking in Malacañang.

Senate Minority Leader Franklin Drilon said De Castro should recuse herself from political cases to dispel any doubts about her impartiality.
Drilon also said Justice Antonio Carpio, the most senior in the high court, should apply for Chief Justice when De Castro retires on Oct. 8.
Former Chief Justice Reynato Puno said De Castro’s tenure would likely be too brief for new programs, but she could use the time to patch up her “differences” with other justices.