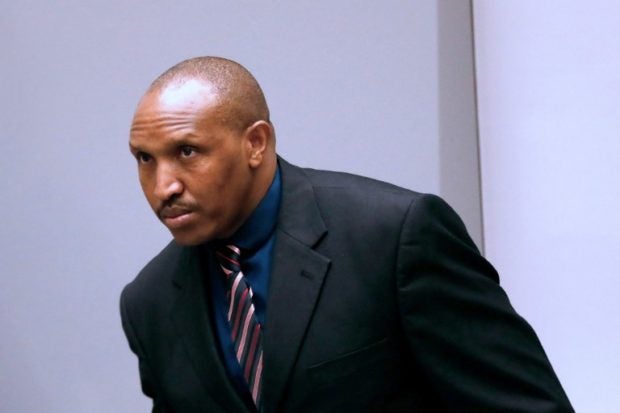 Former Congolese warlord Bosco Ntaganda arrives at the courtroom of the International Criminal Court (ICC) during the closing statements of his trial in the Hague, the Netherlands, on August 28, 2018.
International judges will hear closing arguments on August 28, 2018 in the case against former Congolese warlord Bosco Ntaganda, accused of war crimes including using child soldiers and sex slaves in his rebel army. Once known as “The Terminator”, Ntaganda faces 13 counts of war crimes and five counts of crimes against humanity for his role in a brutal civil conflict in the DR Congo’s volatile east more than 15 years ago. /PHOTO: AFP, ANP, Bas Czerwinski

In their closing statements against the man nicknamed “The Terminator,” prosecutors described how his rebel army conducted a reign of terror in Ituri, in the northeastern Democratic Republic of Congo, in 2002 and 2003.

“A lot of people were executed by hand, with machetes,” ICC chief prosecutor Fatou Bensouda told a three-judge bench at the Hague-based tribunal.

“Some of them were disemboweled, even pregnant woman as well. They took the fetuses out of the women,” Bensouda said, quoting a witness’s testimony during the trial.

Ntaganda faces 13 counts of war crimes and five counts of crimes against humanity for his role in the brutal conflict that devastated DR Congo’s east more than 15 years ago.

“The evidence has proven beyond all reasonable doubt that Bosco Ntaganda is indeed guilty of the crimes charged against him,” Bensouda said.

Ntaganda, dressed in a black suit, dark-blue shirt and striped black tie and with a pencil moustache, listened intently with his glasses perched on his nose and occasionally taking notes.

The Rwandan-born former rebel chief pleaded not guilty to the charges at the start of his trial in September 2015.

On Tuesday, prosecutors said Ntaganda was central to planning operations for the Union of Congolese Patriots and its military wing, the Patriotic Forces for the Liberation of Congo (FPLC).

Known as a charismatic commander with a penchant for cowboy hats and fine dining, prosecutors said Ntaganda used child soldiers and coerced women soldiers into sexual slavery while attacking civilians on ethnic grounds.

“He persecuted and attacked civilians, he murdered them, pillaged their goods, destroyed their churches and hospitals,” in a bid to rid Ituri of Lendu and other inhabitants who were not from the Hema ethnic group, he said.

At least 800 people were killed by the FPLC as it battled rival militias for control of the mineral-rich area.

Prosecutors in particular singled out Ntaganda for allegedly leading a November 2002 attack on the gold mining town of Mongbwalu that lasted six days and left 200 villagers dead.

The soft-spoken Ntaganda however during his trial balked at the “Terminator” nickname and told judges he was a “soldier, not a criminal”.

Ntaganda wants to present himself as a “human being”, his lawyer Stephane Bourgon told AFP. He said his client was likely to make a statement during the closing arguments.

The first-ever suspect to voluntarily surrender to the ICC, Ntaganda walked into the US embassy in Kigali in 2013 and asked to be sent to the court.

Ntaganda is also a founding member of the M23 rebel group, which was eventually defeated by Congolese government forces five years ago.

More than 60,000 people have been killed since violence erupted in the volatile Ituri region in 1999, according to rights groups.

This week’s hearings will run from Tuesday to Thursday.

It could take months, even years, before the ICC’s judges hand down a verdict.

The three-day hearing is set to be followed with interest after the surprise acquittal of another former Congolese leader, Jean-Pierre Bemba.

Initially sentenced to 18 years for war crimes committed by his troops in the Central African Republic, Bemba was acquitted on appeal in June. He has since returned to Kinshasa.

However, Ntaganda’s former FPLC commander, Thomas Lubanga, was sentenced to 14 years’ jail in 2012. That was the second conviction by the court since it was set up 16 years ago to try the world’s most horrific crimes.   /vvp