“I am not for making it a parking lot, that’s Burnham Park,” Puyat said in a forum with Inquirer.

Puyat then assured the public that the Department of Tourism (DOT) would continue to talk with the local government regarding the issue.

Puyat admitted that Baguio became congested over the years with vehicular traffic around the city becoming worse.

But instead of erecting parking buildings in Burnham Park, Puyat raised the possibility of lowering Baguio’s carrying capacity, which she said has now become congested. 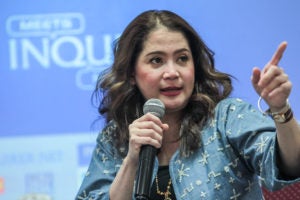 Puyat admitted that she was still unsure on just how to limit the city’s carrying capacity as tourists can quickly reach it. She said the DOT would be closely talking with the Baguio City government on how best to resolve this issue.

“So it’s more of to talk to the LGU (local government unit), because like you, I really don’t like to go to Baguio when it’s peak season. I’d rather go when there’s nobody and not peak season,” Puyat said.

Baguio City Mayor Mauricio Domogan, however, insisted on the construction of the parking buildings, according to reports from the Baguio local press. /muf